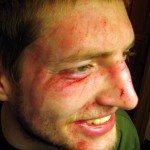 Recently I was away skiing in Hundfjället, Sälen, Sweden.

I went into the second steepest slope there, as the steepest one (The Wall) was closed off for upcoming competitions; and as I fiddled with the camera which was attached to my right foot/leg, I did not see in which direction my friends turned at the bottom of the slope.

I saw the warning for a crest, but nothing told me which way to turn, so I turned directly towards the lift system where the snow was n0t prepared so I sank through the crust with the left ski (snowblade) which made me do a faceplant on the icy crust at high speed, pushing my glasses into my face and doing some friction damage. You were supposed to turn left instead, apparently.

Luckily only one ski sunk through, or my nose would probably not look very pretty (only the right side of my face hit the ground), and my neck might have gotten damaged. My continued rotation rotated me sideways, so there was n0t much more damage done, but my shoulder and neck on my right side was stiff like concrete the day after :p

The most painful part of the injury was the damage on the inside of my lower lip, really annoying stuff :x

And here is a video from the camera I messed with before going down the slope! The reason why it all happened.

And with this the blog has its first content :) yay!

One Response to Skiing faceplant!