I’m posting these fairly frequently now because I want to get them off my chest, so I can focus on new ones. You might have noticed the grid in the background of the pictures by now. It’s actually a recent addition I included while converting all the figures from Flash to Illustrator. I noticed (way too late) that Flash is not at all accurate when you import very precise drawings, it was though, the vector application I knew best when I started making these. Now I have them all converted, which is one reason why I started this blog, to have somewhere to put them in a more relaxed manner. Before I had a privately developed site only for my impossible figures, but I found that I was unable to focus on the art when using it, as I would never stop thinking about improvements for the site when just posting new entries. Now, with Word Press, I’m leaving the development to others. 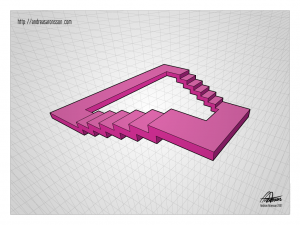 This is an infinite staircase which means you will continue to always walk either up or down. In addition you will also change in size.