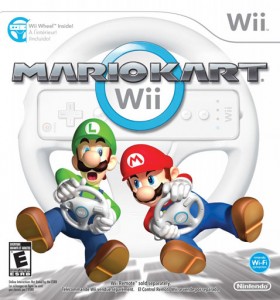 Today I bought Mario Kart Wii, an instant buy, as we have played the previous games way too much. This is a very short, first-day review, only meant to act like a casual comment of my first impressions with the game.

Even if I miss a few things, it seems to be a great game :) and right now, four of my local friends has also bought the game, so there will probably be a few online matches! We just have to decide what we’ll use for voice communication.