I saw a fun contest on ColorsWars2008… through Neatorama. You can submit a picture of yourself when you were young, together with a picture of how you look now, where you try have the same pose and face as in the old pic. You can win a Mimobot USB stick.

Last day to submit is today, so I was a bit stressed when I had this taken, but it ended up quite good anyway, I think. I signed up for Twitter to submit the pics, but as I’m a total Twitter-newbie, I’m not sure if they got them alright. Anyway, here they are, left is 1987 and right is 2008. 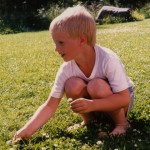 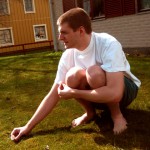 Update: I noticed that you need to follow colorwarsubmit at Twitter before you submit the messages with the links to the images. I know I clicked “Follow” but not if it was before or after I sent the images, so I resent the messages. Lets hope it works :p

Update2: After I submitted a reply via IM, instead of a direct message, my pictures showed up almost at once, at Color Wars 2008. Though, the set includes four pairs of my images, as I did submit four times in total (three via Direct Message at different times. Once before following colorwarsubmit, once before joining a team, and once after joining a team).