I had a bunch of friends over when I made this one. Pia, a friend’s girlfriend and my friend, wanted to see me make an impossible figure so I made the letter P which is the first letter in her name.

This is also the first perspective figure I decorated with a stripe which was nice enough that I later added that to some previous figures while I converted them from Flash to Illustrator. Previously I had wanted to keep the geometry as clean as possible as to not detract from the impossible properties, but adding some detail actually strengthens the effect by separating directions and surfaces. 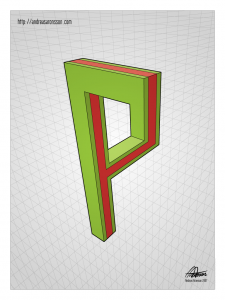 The bowl on this letter P is facing two directions at once while still being attached to the same stem.