This figure does not have a corresponding orthographically projected figure. It is basically an impossible tribar, but in actuality it is a spiral that goes into itself. If this was drawn without perspective, it would just look like an expanding spiral or a normal tribar, depending on how you interpret it. 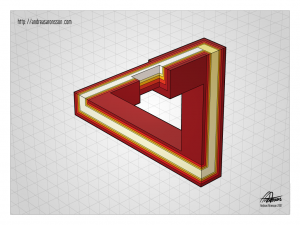 This is not just a tribar, it is a spiral that starts at the cutaway and then travels into the picture. Where it should go behind itself it instead intersects and continues inside itself.