The past weekend was three days long because of a national holiday, so I was out of town from Friday morning until Sunday evening. Good times!

I took a bunch of various pictures even though the weather was mostly gray with spots of rain, but some might be worth posting!

On the Friday I went to a conference called Nyhemsveckan, camping with my parents and my brother in a caravan. The pictures below are from the pine forest we were stationed in. 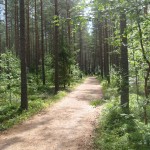 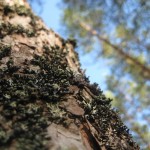 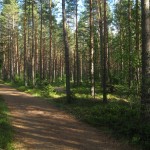 They’ve had a large tent for the meetings and concerts for ages, but this was supposedly the last time. After this they will build a large conference building instead. For this reason I made sure to take some pictures of the tent, and following is a panorama from one of the ends of the tent, which is where I sat.

The next day, Saturday, we went to a candy factory, which is traditional for us to visit. It was quite crowded, so the queue was stretching to the far end of the outlet area. While standing there I noticed what they had painted on a couple of doors (might have been there since always!), and it was a pair of illusionary corridors! I’ve been planning to make something like this on my apartment door for a while, though… I think it’ll have to be on the inside, as the landlord might not like if I modify the outside of the apartment. 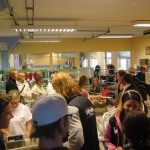 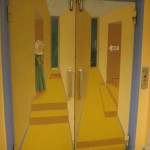 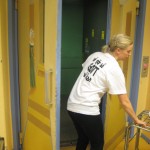 After this me and my brother spent the evening and following day with a few friends living in a nearby city. While there we played some multiplayer Tetris on their projector. When you finish rows you send them to other players so their bottom row gets duplicated, or remove rows, etc, depending on what is shown below your playing area when you do so.

In the two pictures below you can see Player 2, which happens to be me, having a screen full of rows added by other players (or myself, you can do that too), but both times I happened to get a 1×4 bar to drop down the single collumn hole to the bottom! 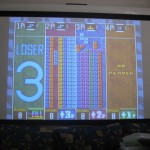 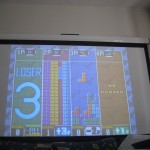 Next is a picture I took while walking back after eating out, holding the camera on my outstretched arm taking random photos. It is my face that’s closest to the camera. When browsing for pictures to post I just couldn’t drop this one as I really like how the light just barely manages to hit the roofs of the buildings, which I still look like toy houses! :P 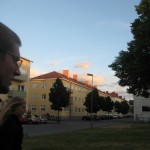 In general, a terrific weekend :) As a bonus, I’m adding a boxy sky panorama taken today while I was biking home for lunch! 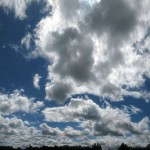