Here I have experimented with constructing a figure out of predefined lines. If you would draw lines from the zenith vanishing point to match the ones in the figure, you would see that most of them have the same angle between them.

At first this wasn’t my original plan but it became my solution for deciding the widths of the poles connecting the two bars. 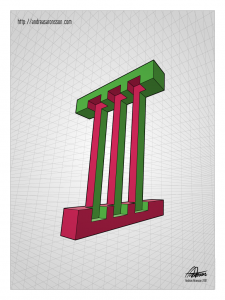 Three beams are attached perpendicularly to both bars, even though the bars are facing two different cardinal points. Notice how what seems to be the inside turns to the outside between top and bottom.