Posted on August 6, 2008 by Andreas Aronsson

This figure was another experiment to work with non-orthogonal surfaces. It is a bit more work, both when drawing and shading, but the figures get a different feel to them. They don’t come naturally when thinking up impossible figures though, not yet at least. At first I was unhappy with this figure, as it was hard to make out how it actually looked, but then I separated it into three sections, which helped it make more sense. 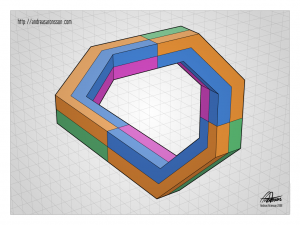 This is a chamfered impossible tribar. As a direct consequence to being impossible, one color will rotate around the figure in just three steps, even though being one out of four.