Without Water at Work

Two days ago, that is Monday, the day started with the announcement that we had no water, as a water leak had been discovered near our building. During the day I saw various machines and people coming and going outside my window. At one point I was up on the top floor so I spent a couple of seconds snapping a few pictures from there. It’s not everyday that people sporadically dig up a large pit on in the lawn on the other side of the road. A change to my view.

We eventually got water from a nearby supply to keep the factory up and running, but midday yesterday things were like normal again, except for the pit then. 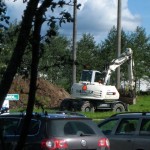 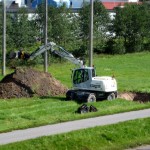 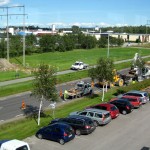 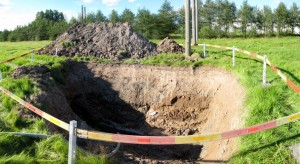 Oh, and while I’m talking about pictures… I have to sit down and pick some out from my vacation to post. Someday… soon, hopefully.

I also tried my shaky hand to record a zoomed in video to be able to create a loop. As you can see below my hands were indeed shaky, but at least it kind of loops! Next time I’ll make sure to get a tripod. I like video loops… but this one is a bit too wonky :P played back in four times the original speed.