Posted on September 17, 2008 by Andreas Aronsson

I first drew this figure on paper in perspective, a bit distorted. It was fairly complex so I decided I would draw it in an parallel projection to make it easier on the mind… bad idea. It was a great hassle to get the right lengths on everything, so I aborted that and went straight for the computer instead.

This figure probably has the most complex chain reaction of proportional relationships between surfaces in any of my figures so far. I basically worked my way through the entire thing without stopping, as one edit lead to the next and so on. I also found that in the end the lines didn’t match, but through error location I found the two mistakes which had caused the oddness, as well as another minor glitch. I finished it after four hours of concentration. 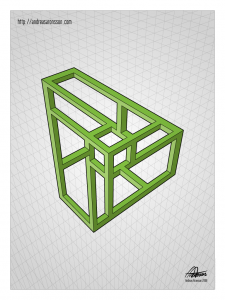 The outside of this figure makes up a traditional tribar structure, but embedded in the middle is a cube-ish framework. Between them there is a large amount of impossible connections.

I screen recorded the entire process of this figure. I’ve been a bit indecisive about posting how I create these pieces as it’s something I feel fairly unique doing, but it is fun to share. Hopefully it takes a bit of skill and motivation that is uncommon to make these creations. Below is the video embedded, but to view it in fullscreen you might have to head over to Youtube!