My eyes! My eyes! Aaaargh!

Posted on September 24, 2008 by Andreas Aronsson

Last week I was at the optician to try out one-day-contact-lenses. There, with the guidance of the professional optician, it took me an hour to insert and remove a contact lense for one of my eyes. As I am going there tomorrow again for a followup where I am supposed to wear the contact lenses when I arrive, I decided it was about time I practiced today. I’ve been postponing it as I have had a cold since the middle of last week, and it’s not advisable to use contact lenses when sick, but now I’m mostly fine. 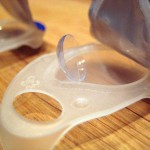 I wasted the two first lenses I tried to insert, as it took too long, so it dried up… but on my third try, after 40 odd minutes, I got it in there! Dang, I really don’t like putting things in my eyes! Then, after finishing the right eye, I got the left lense in at the first try… I ended up mounting a mirror on top of my kitchen shelve so I could see what I did, even if I looked up. Then when putting the lens in I looked as far up as I could, and it kind of solved itself. After trying lenses I have a deep respect for those who can just slap them on and remove them in an instant… or are they just insensitive?

Then, thirty minutes later, I decided it was time to remove the contact lenses. This time around it was the complete opposite. The right eye gave me its lens almost at once, while the left eye almost had me panic. I see better on my left eye, so that lens is much thinner than the one I wore on the right eye. Which my explain why it went on easier. Now, when removing it, I had a really hard time to see where it went! At one point, I thought it had rolled up, but when I tried to grab it, it vanished! I rolled my eye about like a madman trying to find the little roll, and I thought I could feel it on top of my eyeball. 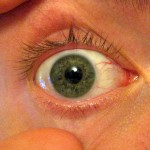 Eventually I took out my small Fenix L0D flashlight, which I carry on my keyring, to see if I could locate the thing. Then I could see a very thing outline around the eye, the lense was still on!! Whew… a few moments later and I had it out, and breathed heavily as my life was saved. I have a hard time seeing myself getting used to the horror of inserting foreign objects in my eye sockets.