Posted on October 7, 2008 by Andreas Aronsson

At work we are supposed to have private mugs so the general ones can be used by guests. I used a blue Christmas mug at first, but now I have one which is truly mine… me! Surely nobody will mistake it for theirs! 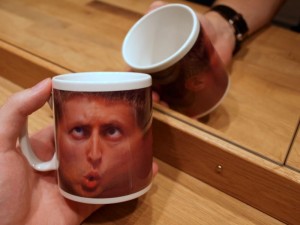 Read on if you want the full story behind the creation of the mug(s)!

In 2000 I found photos made by Andrew Davidhazy, a professor in imaging and photographic technology, but by then I did not know how they were made or who had made them. Six months ago or so I found the files on my computer and could via Google Image search find where they came from!

Andrew Davidhazy utilized a scrolling film with a slit that exposes a beam of light over time, creating weird photos which fascinated me; especially those of people. As I did not know about this technique at the time, I came up with my own way of how to create similar images.

As depicted in the crude 3D animation above (from 2000-02-25) my idea was to use a video camera to record imagery, and then I would extract a column of pixels from each frame in the video to create my images. At the time I only speculated in what kind of apparatus I would need to rotate a camera perfectly around objects (like my own head) to create unwrapping pictures, but I never got to constructing anything as I was not very resourceful back then. 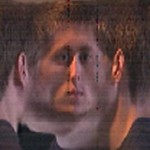 The image to the left is from 2001, generated by sitting on a rotating office chair while recording with a webcam. The software used in this case was a VB application which saved columns of actual screen pixels, made by a school classmate. Not especially practical but it worked, the entire thing was experimental.

In 2003 I begun to use parts of my thought out method with a static camera which rotated to create standard panoramas in Halo, a videogame for the Xbox. To do this I had my cousin create a specialized software to process the videos after my specifications. This is the same application I used for this project, five years later.

Now, in 2008, the concept sparked to life in my mind again when I got the pressure on me to find a private mug to use at work, and I decided it was about time to realize the old idea of unwrapping my head. Many of the things I would need this time around were readily available, or could be acquired cheaply. Here is what I needed. 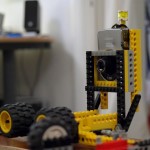 The camera I used was my beloved Canon Ixus 75 bought in January prior to a skiing trip. It is a cheap ultra compact camera but it is the best video capture device I currently own, and it is physically small enough to simplify the next step of the project. It captures a compressed video stream in 640×480 pixels at 30 frames per second, which had to make do. A feature I found after about 15 face scans was a way to lock the exposure/ISO setting during recording which generates a much better image. Too bad I did not find that earlier!

In accordance with my old idea of how to scan a head I decided I would create a device that carried the camera on around my head, looking inwards all the time. The easiest way to construct this was to use my old LEGO bricks. 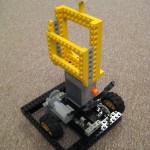 First I created a vehicle with different speeds on the inner and outer wheels, which caused it to move in a circle. It ended up being way too hard to align it correctly for a perfect circle and it had to travel at a very slow speed to not vibrate or shake too noticeably.

My second concept was a whole frame that would rotate around my head. I experimented with different wheels and constructions. Wide tires would have too much sideways grip so they would only gradually follow the circular track, causing it all to wobble. I ended up using the thinnest tires I could find. 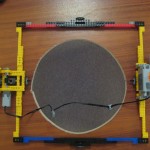 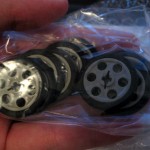 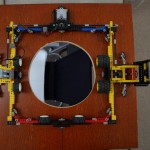 For propulsion I started using two motors facing each other on the construction, but as the motors got different speeds even though they were of the same model I used one large motor instead. I ordered the extra motor and extension cables to reach the battery pack from the LEGO store. In addition I bought additional tires off of eBay as I only had five of them from the beginning. 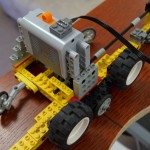 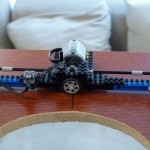 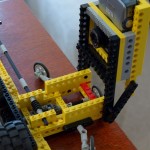 The final construction is supported by 16 wheels that is in contact with the surface, four of which are driven by the motor via gears, axles, screws and two differentials. The larger tires were added to counter some of the weight and to add grip. The camera hangs outside the outer supporting wheel which caused the inner to slip, causing the rig to travel outside the edge of the table. 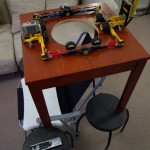 First I got a second hand table which was one meter in diameter, sawing a hole in the center. This table was round and nice, but it could be extended; which meant the board was split in two. This caused the LEGO construction to jump as it crossed the seam to the other board. I went back to the second hand store again to find a table with a whole board. Finally I got a smaller table, square, and precisely the right size.

As I mentioned before I used the old application my cousin made for me when I created the Halo panoramas. One limitation it has is that it can only handle raw AVI files which cannot be larger than 1GB. To work around this I cropped the video to a small stripe and exported that without sound. A side benefit is that it saves disk space as well as making it lighter to work with.

I tried several different ways of positioning the table and myself before I got to the final scan session. This is how I ended up doing it. 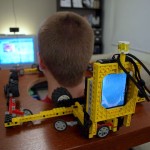 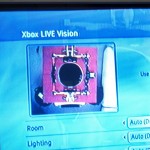 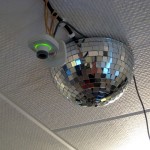 I began with setting the camera to video mode, macro and fixed ISO value. Then I focused it on my hand which I put where my head would be, turned on the recording and inserted it into the LEGO construction and turned on the LEGO motor. Next I climbed into the setup, which almost always resulted in a sour shoulder or other muscle pain, and tried to align my head while the LEGO traveled around the table.

For a successful capture I need to sit still for about two minutes with the same face. Your face can relax when the camera has traveled past it, but the risk is that you change your posture if you relax too much. Some of the faces were hard to keep for two minutes, as well as not blinking when the camera passed! 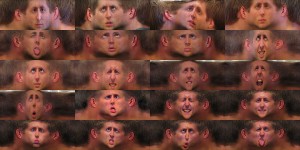 Other considerations where lighting, angles and distance. I noticed that I got blue strikes through some images, and that was due to my wall mounted lamps getting into the video image. As for positioning, whatever you have closer to the camera will take up less horizontal room in the generated image, so to get a result that is as proportional as possible I needed to center my head. As you can see in the collection of scans keeping your head straight is also important. When you angle the head a whole lot of distortions enter the picture. If you lean your head to the side the whole image will be heavily distorted, but that was easy to control. It was harder to remember to look straight forward, if you do not your ears will be rotated and moved, getting different proportions compared to when you keep your head level.

After several face scanning sessions across several months I finally decided I had images I was happy with. I cut them up in Photoshop and adjusted scales so my ears would be in the right places on the mug. After that I ordered three panorama mugs from Emmagjort.se, I found their price was very acceptable and even had phone contact to arrange the details, very nice! 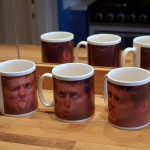 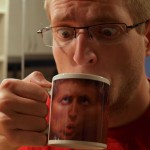 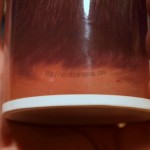 This concludes the eight year old idea… fantasticly relieving! Of course I have ideas of how to make a much better construction from engineered metal parts, but that is 20 years off.

7 Responses to I Am Mug