Posted on October 8, 2008 by Andreas Aronsson

When thinking up this figure I had in mind a modern version of the circular pillars turning into a square U shape, here at Impossible World, just that now three more-than-square pillars turn into four pillars. I really enjoyed creating the actual geometry, but when coloring it ended up being a hassle with all the gradients, even though I finally settled for a comfortable way to manage it.

Update: These kind of figures will be smoother to create soon, when Illustrator CS4 is released. Apparently it will support gradients with transparency, which it now does not. I just hope that there will be more settings for the gradients and that the tool will snap to points. I really wish Illustrator had some of the awesome features Flash has had forever.

After finishing this one I thought the many gradients made the figure a bit difficult to look at, even though it might look nice, it is hard to appreciate the lines. So I made up my mind about putting up “wireframe” version of the figures as well, with a single line weight and without the colors, shades and background. 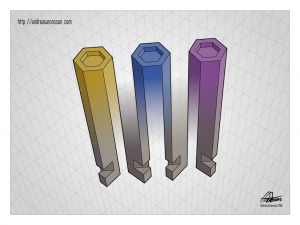 At the top they are three pillars, but at the bottom they turn into four!