This figure was a lot more work than I had expected. All arcs except the center one was redrawn to compensate for the size differences generated. I used the average value for everything possible for both the arcs and the colored lines. Someday I might superimpose all the different save files I have, to display all the reference lines I’ve used. 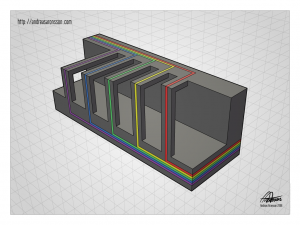 Five arcs between the wall and the floor, but only the center one has the right proportions. The other four arcs ar either too deep or too high!