Before I started making impossible figures in three point perspective I drew them in parallel projection. What I’m posting here is my greatest figure from that category. I made a few sketches in 2004, the idea was to prepare for a Photoshop project where I would create a piece that would look like a real Halo level, but I never got around to that part of the concept.

In 2006 Stuntmutt, the writer and artist of One One Se7en (now only updating sporadically), was getting married and as I’ve had lots of good times using his versions of the Halo characters and cooperating with him in person, I decided to dedicate this to him, his art and his new family.

While the happy couple enjoyed their honeymoon a few of the (Halo) community people had made guest strips which got posted during the absence of the original author; and this illusion was created to complement my guest strip (left).

Originally you had to figure out that there was more to it if you clicked the blinking crystal (2552 Sep 7 and the next)… I’m not sure how many who actually found it, or even understood the comic. Today I present the larger art directly for easy access.

As I usually do not create pieces with this amount of details, I was a bit indecisive of how to present it online. I ended up creating my own flash viewer; which you can launch by clicking the image below or this link. Hover the question mark in the top left corner for controls. 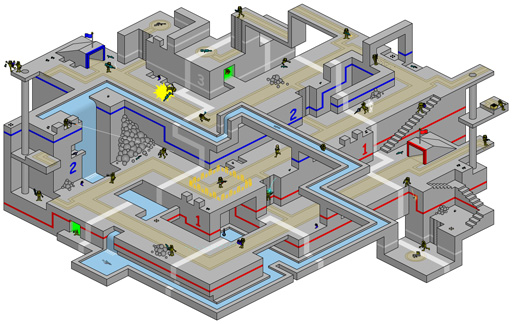 The entire figure was drawn and colored in Flash. As there was a lot of work to do I used the application I felt the most comfortable with, and Flash has really intuitive drawing utilities, I think, it only lacks in accuracy and resolution as it’s not really made to create print art. The work in 2006 spanned from late March to mid May, and as I only did contract work around that time I could spend a big chunk of my time on this.

Back then I also created this file to see the creation process over time. Only step #1 and #2 are from 2004, the rest are from 2006. This file has not been displayed publically before and was planned to never be, so please feel a bit privileged when viewing it now!

And as nobody will probably figure out the secrets or interesting details, I will list what I can recall. I think there was something with the number of weapon spawns and MCs as well, but I can’t seem to make any sense out of that now.

Lastly are a few screenshots from the levels I used as inspiration for the art direction. I grabbed the images from my own collection of Halo panoramas.

Phew! This was way more information than I initially planned to write about this piece of art.