Posted on November 5, 2008 by Andreas Aronsson

My original sketch for this figure was a bit simpler, with just five wheels, but while I was drawing it on the computer I added one wheel to the sketch. But after finishing that version of the figure I decided to add another two wheels, just because they fit. And I think that made it into an interesting piece of art. 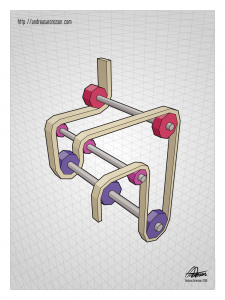 The belt goes back and forth between the different axles, but as it does that it also travels forward- and backwards while only bending around one axis.

As this is a fairly complex figure to draw, to say the least, I decided to try a new way of depicting the process. Below is a video of each save state. Before removing all reference lines after finishing an element I save a new file, in the video I fade between them forward in time. I think it ended up easier to follow than the actual time-lapse videos, but I do wonder if there is a way to save all AutoCAD steps as they are logged, and then replay the drawing in some way… will need to research this. Anyway, the video is best watched in its native HD resolution in full screen, you might have to head over to Youtube for that!

With this posting I’ve caught up with myself so from now on postings of impossible figures will be further apart. I create at least one per month, as I’ve set that as a rule for myself, to keep at it. I tend to get several ideas at once though, so I think I will be able to manage two per month, if time and brains permits. We will see.