Posted on December 1, 2008 by Andreas Aronsson

Last week I made an investment and bought a new TV, one of those flat ones. Previously I’ve been using a 29″ Sony CRT weighing about 45 kg, lots of glass as it has a perfectly flat screen. Last Thursday I got myself a (craezyhueg!) 52″ Samsung LCD, at 35 kg. 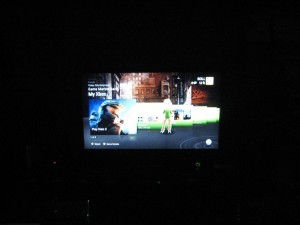 I didn’t have to shell out too much for it though; Media Markt was opening a new store in a neighboring town and they had a really nice deal for it, much because it is a model from 2007. Back then it cost almost three times as much as I payed for it now!

My eyesight is a bit wonky as I have bad vision in the dark and I easily get blinded by bright lights. I guess that might be why I really want background lighting to even out the contrast between the TV and the background. 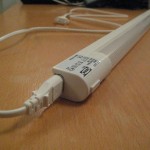 With the old TV I had an IKEA Liesta fluorescent tube just lying on top of it, with the new flat LCD that would not be feasible as there is nowhere to place it! At first I put it on the center speaker which I had behind the screen, but as the TV foot has a high gloss surface the tube was reflected like in a mirror, appearing as a bright light when sitting in the couch.

To fix this I had to get the tube higher up and closer to the back of the screen so it would not be visible through the reflection in the foot. I got the idea that I would get some suction cup knobs to mount on the back, as the entire chassis is the same high gloss plastic as the foot. I eventually found a product at Clas Ohlson which seemed perfect for the job. 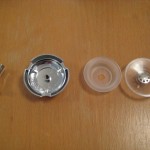 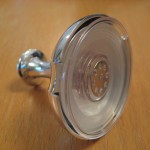 The knobs are “screwed” in place. When rotating the outer shell the inner membrane is pulled away from the surface which generates a vacuum, fixing the device in place.

To get some more lighting I added a second fixture. They come with a short cable to connect the tubes in a series (like the Internet), which was thankful. At first I used rubber bands to have the single tube stay on top of the knobs, but when another one was going to hang beneath it I used cable ties instead. 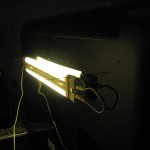 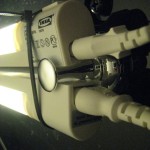 A friend warned me that these things (naturally) doesn’t stay up forever so I will add something for security later. It will probably be pieces of string tied around both the lights and to the VESA screws you see right above the knobs.

Below is from the same view as the picture at the top of this post, just with the background lighting turned on! It looks more yellow and concentrated here than it feels in reality, but I guess that’s what I get from using a point and shoot camera. 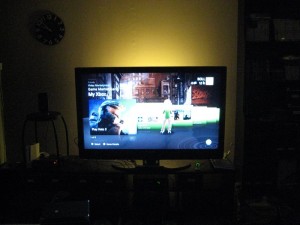 Update: As I was warned, it did fall down, but just after a few weeks. My own theory is that it fell down because becase I mounted the pegs when the TV was cold. When it warms up the vacuum suckage would decrease due to the air left would warm up and expand. Yesterday (2008-12-25) I put it up again, but with a slightly adjusted position and angled lights, as well as safety strings around the VESA screws to keep it up when the vacuum fails. Below is a picture of how that ended up! 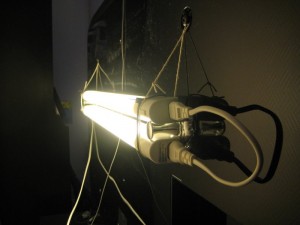