Posted on December 29, 2008 by Andreas Aronsson 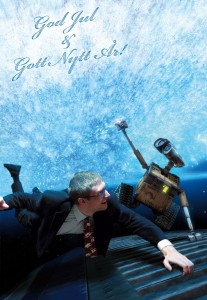 From the title you could think that I have made cards for many years now, however this is my first time! Ever since I photoshopped a Christmas card for a friend I have wanted to do one of my own, unlucky enough I have been very busy leading up to this holiday so it took me until the evening of the 21st, a Sunday, to actually make it. Obviously I got to mailing them way too late, the 23rd, but I guess better late than never! At least the cards also say “Happy New Year!” so they will not be totally out of place when they arrive at the 29th.

I had an idea of putting myself into a movie, meaning into a photo from a movie. I googled around a bit but did not find a good source for high resolution movie photos, but eventually I stumbled upon high resolution Wall-e pictures over at /Film and decided I would use one of them.

For the photo I setup a couple of stools in front of my projection screen with a floor fan blowing at me. The camera was setup so I saw myself at a 14″ TV screen and I triggered the camera with an IR remote. At intervals I loaded a photo into Photoshop and placed myself in the Wall-e picture, to see if the lighting and pose worked. In the end I used a work light mounted in the ceiling to fix the lighting, though I adjusted it once by moving the hooks further back into the room so my face would not be completely shadowed. 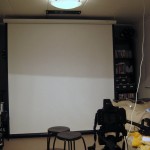 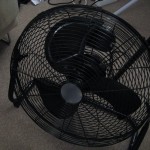 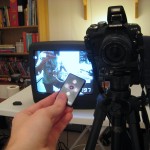 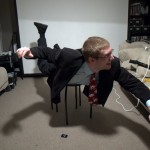 After I had a photo I was happy with I sat in Photoshop for roughly 4½ hours. I cut out myself, decolorized my shirt, added the blue light tint, a shadow, fixed some details, added snowflakes and text… done! The snowflakes are downloaded brushes by =meldir. 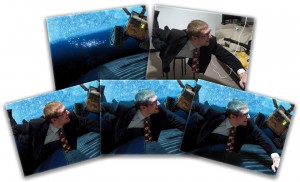 It was quite troublesome to get a good result at the print shop as their real photo printer was out of order, but as I was too late to look for other printing options it had to make do. I might get a photo printer of my own until next year. Below are the resulting prints, which does not look really as nice as the source looks on screen, but I am at least satisfied with the picture itself, especially for being realized during a single evening. 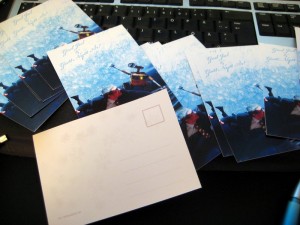