Posted on January 6, 2009 by Andreas Aronsson

A month ago, December 1-5, things were very hectic. The week before that I had been pondering what I should dress up as for a masquerade Christmas party at church. The theme was characters out of the Disney show that traditionally is broadcast on national TV on Christmas Eve here in Sweden. I had a few stupid ideas from the start, though they seemed like too much work to be finished in time, but in the end I used one of them anyway.

I was going to dress up as the jack-in-the-box character that is the last toy to jump into Santa’s sack in the short movie Santa’s Workshop from (gasp) 1932, available for viewing at Youtube. My other ideas were the propeller airplane that wrecks chaos on the shelves or an almost fully painted chessboard both from the same movie, but I decided those would take too long to design and realize, and be even more cumbersome to wear than the jack-in-the-box costume. 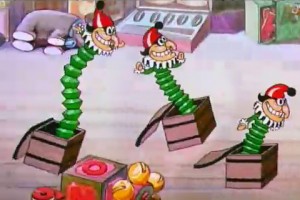 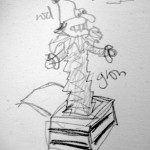 The party was on Friday, December 5th, and I had decided what idea to us the Monday night the same week. On Wednesday I bought whatever was needed and planned how I would make it, and I spent Wednesday and Thursday manufacturing the outfit. A total of 11 hours of manufacturing, a bit more than I expected. My kind parents let me do it at their house, as my apartment lacks the necessary space and machinery.

I started by fixing up the hat. It was a red Christmas hat with the white cloth removed, instead I added a black ball, elastic to make it stay on my head and stuffing to make it fluffy. 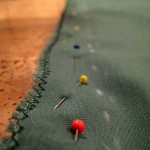 Then I started working on the green ring suit. It was a bunch of sewing to make it, the top and bottom edges had canals for strings and then it had to be a large tube to contain the rings. I got some help to attach the rings and add the shoulder straps. 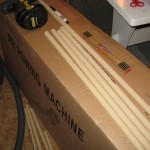 The box was made out of a quite thick cardboard, my hands were really worn out after cutting and folding it in several ways before I ended up with a good result. I also sawed PVC pipes to reinforce the construction. It was kept together by thin steel wire which me and my father pushed through the cardboard, around the pipes and then twisted, a few around lolly sticks to spread the stress. I wore it by cargo straps through the belt loops on my trousers.

Last summer I got some weird face-paint when getting a burger meal at Mac Donald’s (hurgh) which had been lying about on my desk since then. A desk that never seems to get organized. It seemed transparent when I applied it, but it ended up looking pretty good anyway. The problem was getting it off, the oily stuff was hard to even get off my hands! Which explains my pose in the photo below. Around midnight when I was home I spent an eternity scrubbing my face, since I just wanted to go to sleep. My skin ended up like after a bit too much sunbathing the next morning. The next time I get the bright idea to paint my face I will use something better and make sure to have good chemicals to remove it with afterward. 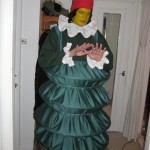 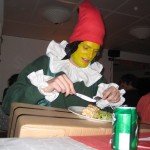 The end result: I got a box of chocolate for my efforts! Apparently they liked my costume enough that I won the grand costume prize. Still not sure if it was all worth the stress, pain and discomfort that it brought with it, but at least I might have put a smile on a few people’s faces. Now I just want to forget it all, hahaha.

Update: At 2009-05-29 Aftonbladet published an article about a small girl who had used the same McDonalds crayons to paint herself, and the paint is just about impossible to remove! They [the parents] even consider that she will have the colors when grown up! Apparently the crayons become like this as they age. Originally they were givven out for the European Championship in Soccer in June 2008, so when I used mine in December 2008 they were about six months old, and the color was _VERY_ painful to remove. In the article they had gotten the crayons just now, which makes them about a year old, so that particular McDonalds were handing out old toys, amongst them the blue and yellow face paint crayons. Suddenly I feel a bit lucky.