I am still keeping up with creating two a month. It is as tight as it can get now though, as can be noted I created this one the day before the last one was posted, so my margins are still shrinking.

Something to take note of in this figure is the pixelated diagonal line that crosses the figure. It actually scales as if all the steps had been at the same horizontal level. It is not impossible geometry, but the relationship is still not what you would expect. 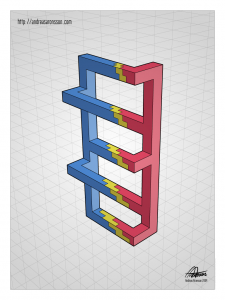 The horizontal beams bend at one end, but not the other, while they are still connected vertically. This makes it possible to travel a horizontal distance that you can avoid by just climbing one side.