In preparation for a top secret personal project, which is still many months away from completion due to many reasons, I have setup something really tasty on my machine.  For this project I needed a disk area with great random read/write properties, like an SSD or hardware RAM disk. I have used software RAM disks before but as I really like to reserve as much memory as possible for Windows to manage it has been a while since I prioritized to dedicate memory to one, and it was not what I considered first.

I started to ponder different options after falling upon articles about SSD raids and raided SDs, checking out SSD and SD performance and prices, as well as other hardware like the Gigabyte’s i-RAM solutions (which I have been interested in previously) and PCI-Express SSDs of humongous capacity and… price. None of the options were easy to get. They were either not released to market, not available in my region of the world, too expensive or a good value for your money or just over dimensioned.

Retreating from a hardware solution I began researching which software options there were at this point in time, it was probably half a decade since I had used a software RAM-disk. While sniffing around I ran across SuperSpeed RamDisk Plus 9, which did not grab my attention until I read the blue text on that page!

“RamDisk Plus 9 has a most unique feature. Our patent pending technology can access memory beyond the limitation imposed by a Windows 32-bit operating system! In other words, RamDisk Plus 9 can use “unmanaged” Windows’ memory e.g. above 4GB. It can also use the stubbornly inaccessable memory between 3.2GB and 4GB.“

Was this really possible? As I had already installed 4GB of memory in my machine (WinXP 32) back in November last year I had unmanaged RAM to try it out with! And to my delight it worked just as promised, even though they did say that the hardware had to allow it, which mine luckily did! After this test I promptly ordered another 4GB of Corsair DDR2 PC2-6400 800MHz memory to fill up my motherboard with, and they arrived today, while at the same time I am home from work with a fever so I had plenty of time to install, even though I repeatedly retreated to my couch with a cuddly blanket. 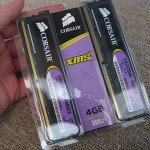 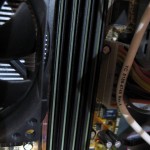 Setting it up was a breeze, after I had read the help documents a bit and googled some… to realize I was debugging a non-existing problem, but enough about that. Here is the end result: 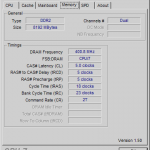 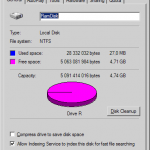 I used CrystalDiskMark for some quick testruns, and they sure were quick! The left image is a speed test of my system drive, a shoddy old 300GB disk, and the right image is the speed test of the software RAM disk. I only ran the test once on my system disk as I figured it would take quite a long time to finish it otherwise, while I ran nine iterations on the RAM disk, as you can see in the pictures. 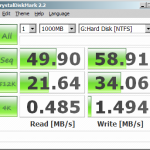 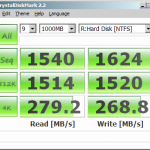 This solution is probably completely useless to the average Joe, but for me it is perfect! Now I just need mr Nyman to add support for a custom cache folder for the (also) top secret (very) super special software he is developing for me, out of pure kindness! He is such a nice guy! Though I believe he plays too much WoW. *cough* In the mean time, the RAM disk will make good use as a Photoshop cache drive.

2011-11-07 Update: This top secret project kind of got lost in time, but now I have a new machine with DDR3… I found the RAM disk performance quite fascinating, check it out below :3 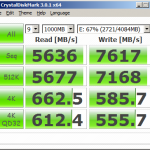 One Response to 4.7GB Useless Awesomeness