I spot something in my eye!

Today was filled with surprises, to say the least. The clock was close to 08:00 in the morning and I was biking to work, then something suddenly came into my vision with scary clarity. It looked very black and spiky, like an asterisk (*) but with more spikes and a slightly uneven general shape. It followed my vision but with a small delay, which did not make sense to me at all if I had gotten something into my eye.

Rubbing my eye gently made it go blurry, which was also unsettling as it should either be gone completely or not at all. When I arrived at work I promptly got to wash my eye, as I figured something was weird, and water is usually a good idea when it comes to getting stuff out of your eyes.

Even after washing my eye quite a few times I still saw a shady dot in my vision, but it had drifted around to different locations. I talked to my office colleges and asked for their advice and finally I called the local medical center to see if they could take a look at it, just in case, and I got a time for 11:00, before lunch.

My parents were nice enough to pick me up and drive me down to the center, as they were going shopping. There they checked me up but could find nothing on my eye; while they still accepted my description of my sensations. To my surprise they gave me a referral to the eye treatment section of the hospital in the neighboring town, as they had phoned in to ask what to do. They suspected, like I had begun to do, that it was something inside the eye, especially as I in the beginning had the dot in perfect focus which should be impossible if it was on the surface of the eye.

After I had had lunch and worked for an hour I got picked up by my father around 14:00 and we drove to the hospital. There the nurse sedated my eyes (!) and checked the pressure of my eyeballs (!!), which naturally I could not feel at all. They used some sort of cones for it which they aligned with a microscope. It went by so fast I did not have a chance to ask how it worked. Then they gave me drops to widen my pupils. Below is a picture of my right eye under the influence, the yellow being the sedation. 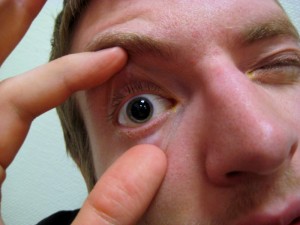 I waited for about 1½ hours, then I visited the bathroom and naturally heard them call my name while I was in there, so they picked the next person instead and I had to wait another 45 minutes or so. When I was finally called for again the checkup was fairly straight forward. The nice doctor shone a very strong beam of light into my eye while moving a microscope about, and had me looking into different directions.

The final verdict was that the dot I had seen was an impurity in my vitreous humor, the transparent gelatinous mass that makes up a majority of the eye. Apparently many get it sooner or later, and it is nothing dangerous, it just shows up as a blurry dot in strong light or white rooms. The doctor got it herself she said. I had never heard about it before, but now I know!

Apparently it was unusual for them to let people get this checkup just like that, and the doctor was surprised, but it might have been because I could see the impurity so clearly when it first appeared. It spooked me out, and perhaps the doctors as well! It probably crossed just where the light inverts before it hits the retina.

I got home again around 17:00 and spent some time in my appartment with the curtains down and the lights off to wait for the drops stop expanding my pupils.

4 Responses to I spot something in my eye!