A little more than a year go I decided to enhance the experience of music video games, they mostly being DDR and Guitar Hero, which I am really fond of. It all started when I randomly bought colored LED strips at IKEA, just to try them out, and I installed them under my TV bench for epic underground pimpage. Below is a short list of what I purchased for this project, in chronological order. The links are mostly to Svebry, an enthusiast  store in a neighbor town with really good prices!

Not everything was in stock, so it took a while to get everything in ready. In addition to the actual hardware I bought extra remote power switches to accommodate for all the new lights, power cables and cable holders, hooks and chains for the light organs. Oh, and a can of black spray paint for the remote.

All of the lights except the stroboscope are on separate remote power switches. The stroboscope is used alone for the best effect, so when I want to use it I just switch off everything on the remote, which only has four channels, and manually turn on the strobe. I have one original white remote for my normal lights and one painted black for the disco effects.

The smoke machine is not permanently fixed somewhere, but something I bring out when the situation calls for it. In addition to increasing the fun you can have with a laser pointer smoke also helps you test out your optical fire alarm!

My original plan was to quickly write a blog post about it all, perhaps with a video, but as you can tell that never happened, until now that is. The pictures included in this post are what got me working on this post and are from last Friday when I happened to get a bunch of people invading my home for some Guitar Hero World Tour action. I had setup my E-410 with an RF shutter so I could take random shots. It really looks like I am living in a box, no? 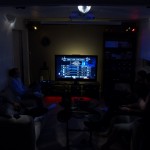 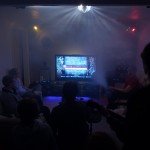 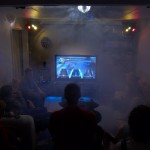 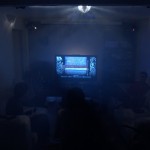 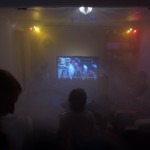 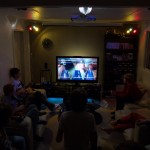 In these pictures all of the gear is active except the strobe, naturally. You can see the light organs with their red, green and yellow bulbs in the corners, the blacklight tube top center behind my normal ceiling lamp, the mirror ball is pretty obvious, the LED strips beneath the TV bench and of course some smoke in the air :)