I came up with the original concept for this project more than one year ago, but it was not until now that I got around to realizing it!

My initial idea was to either print and attach a photoshop job to the door, making it appear transparent, or to paint it to get the same effect but with a more imaginary motif. For this I would mount a board on the door, to avoid making it a permanent modification, instead of using the door surface directly.

While looking through my stuff I found a few door peep holes which I had planned to use to make a fisheye adapter for my pocket camera, but I never came around to doing that. It then hit me that I could mount a second peep hole on my door to enable stereo vision peeping! This was a concept that was easy to accept due to my first peep hole being located near the edge of the door, so adding another one closer to the center would hardly make it look worse!

Very close to the realization of this plan I decided to skip the board because the borders on the door were not perfectly angular, and I was uncertain how well I could get the board to fit. Instead I decided to make an ever changing door, in inspiration from my neighbor who has done it to a door in her kitchen, by painting the door with chalkboard paint and make it a chalkboard, on both sides!

The main ingredients for this project were…

Below is a time-lapse video which shows just about the entire process in a very condensed format.

I have made a short summary as the video can be a bit confusing to follow. It is a fairly straight forward project with pretty basic steps, as you might have noticed, just a bunch of work.

The whole sanding procedure took me ages, and was what caused the project to take way more time than I had expected. The cause was that I had a layer of soft matte paint on top of old and very hard glossy paint, and the matte paint had a tendency to peel off at certain spots, but not everywhere! I figured that if I left it as it were the chalkboard paint might peel off with it when drawn on, so I sanded and scraped until my fingers hurt.

So far the paint is intact, but I was nervous to try it out! Actually, I was not the first one to draw on either side of my door, people managed to sneak in messages and drawings before me! 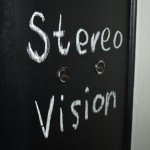 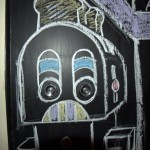 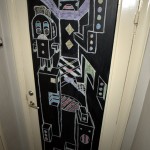 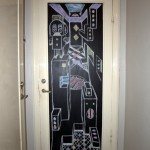 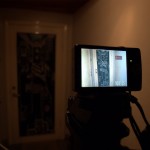 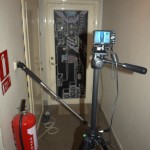 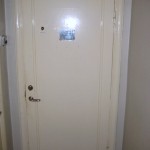 All in all I greatly enjoy my new door functionality! In the beginning it was quite spooky to have a black hole as a front door, but as soon as I drew something on it the illusion of a hole broke and it became a solid door again, luckily!

A fun part with having a door that can be drawn on without ruining it is that people can leave messages, if they have chalk. Though, as I now have drawn all over the outside I guess nothing will end up there until I clean it again.

The stereo vision is also interesting, though the view is seldom exciting, as it is often just a pitch black hallway. So far I have almost solely used it when I know people are coming up the stairs to visit me :)