Published in a Calendar!

Posted on August 9, 2009 by Andreas Aronsson

Back in March, the 25th, I implemented a contact form on this blog, namely Contact Form 7. A splendid plugin I have to say. I did not expect it to get used much, but I had always missed that specific feature myself, as it is what I look for at a site when I want to contact the author.

About ten days later, 5th of April, I got a message through the form from Paul Baars of Paul Baars Design in the Netherlands. It was a request for using my art in a calendar project! The calendar would contain a separate piece of art for each day of the year (2010), with the art being optical illusions. Among the artists whose work was already included were M.C.Escher, Ars et Mathesis, Oscar Reutersvärd, Dmitry  Rakov, Sandro del-Prete, David Macdonalds, Istvan Orosz, Scott Kim, Jos de Mey, Mathieu Hamaekers, Norman Parker, Igor Achkasov, Zenon Kulpa, Peter Raedschelders, Hop David, Jeroen Henneman, Vlad Alexeev, Bruno Ernst, Ken Knowlton and Vicente Meavilla Segui, which is quite a respectable list… I was intrigued.

After a bit more communication I happily accepted the request, prepared the high resolution images needed and credit information to go with them, and that was it!

As compensation I would receive a couple of calendars for free; which suited me perfect as just the opportunity to get published in any way at all is reward enough :)

This Wednesday I picked up a package at the post office, and was happily surprised to find four calendars in it! The print quality sure is spectacular, and I eventually found my own pieces in there. They are at May 1st, Juli 26th, August 17th, September 22nd and November 20th, 2010. 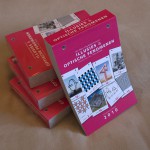 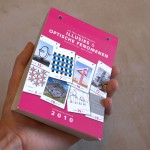 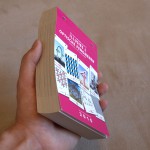 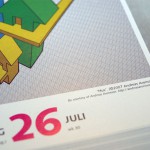 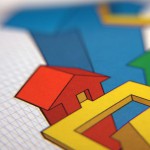 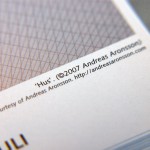 I will have to mark down those dates to check if the link included in the calendar affects blog traffic, it will be interesting!

Very awesome :) Thank you Paul, for including me in this project!

If you want an ILLUSIES & OPTISCHE FENOMENEN SCHEURKALENDER 2010 of your own, you can access the order form at Paul Baars Design directly, if you live in the Netherlands or Belgium that is; here is a PDF (in Dutch) with detailed information. Or, you could look for a Dutch book store, not sure if they ship world wide though.

8 Responses to Published in a Calendar!