This is my graduation picture from 2002. 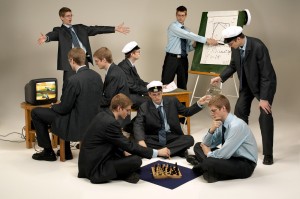 I made this after graduating from my gymnasium studies (senior high school). In Sweden it is a tradition to wear a white hat when ending your studies and escape into the free(?) world of grownups. Taking the photos involved carrying a whole car-full of furniture into a photo studio and close co-operation with the photographer.

Something I have been asked quite a few times is how we made the water pouring. It is really quite simple, I poured the water into a bucket and then held the glass where the photographer said I would. He compared the picture he just took with what he saw in the camera. In the end it looks like I held my glass under the stream of water.

This summer I was asked if I could help out with a graduation photo for a friend, and I was happy to oblige. The idea was to make something along the lines of my own graduation picture, seen above, with clones of oneself.

We spent some time sketching out a few concepts and quickly decided what to do. As she loves her car, and the fact she graduated in health care, a montage of her running over herself while trying to save herself with her own car seemed like a good idea. 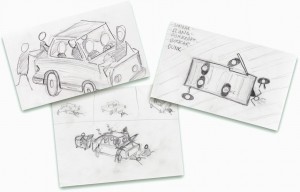 To stop the car from leaning this way and the other, due to its’ suspension, we elevated it with three carjacks. She then posed for all the different characters while I snapped the pictures via a radio remote. People were constantly biking or walking past us, between the camera and the car, but we managed to take the last shot just before the clouds broke up and we had full sunshine. Phew!

The work in Photoshop went very smoothly. After correcting the gamma and position of all photos I simply cut her out from the different layers. There are hardly any overlays where she covers herself in another picture so it was a straight forward process. The slightly more challenging part was the heart massage, and the very funny part was to add the blood splatter… which surprisingly was accepted for the final version which was used for printing! 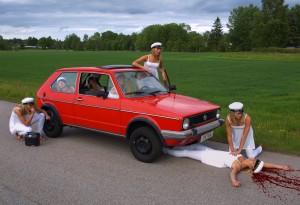 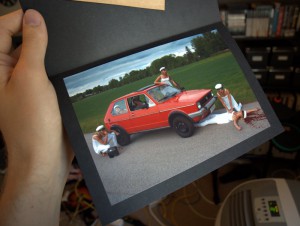 In the end all parties were happy with the result, I think :) hopefully this little project made the experience of graduating even more fun, I enjoyed it at least!