Me, a laptop user?

Posted on September 23, 2009 by Andreas Aronsson

Just about everyone else has a laptop already, so a while back I fell for the materialistic pressure and made myself a laptop user, now I am the happy owner of a black Samsung NC10. It is actually sold as a netbook, but really, I would rather have this one in my lap than an actual laptop, which I nowadays think is very bulky in comparison.

I somehow managed to break the Windows installation on it, and I was unsuccessful reinstalling it via a USB stick. I quickly ordered a USB2 external optical drive to end my problems, a 22x dual layer DVD burner with LightScribe. A bit overkill? Not really as DVD burners today are not more expensive than either DVD or CD players. In difference to most external optical units this is not an ultra slim version, it contains a full size 5.25″ optical drive, so it is quite large! If you look at the comparison pictures below you can see that it probably has close to the whole netbook’s volume! 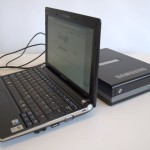 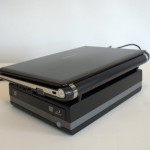 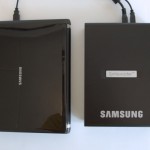 Update: I managed to find the culprit to my machine acting up. After reinstalling the OS I was still experiencing the problem that the task bar and desktop would not appear after signing in, which was quite frustrating. This made me think about what could still cause a problem while the whole machine had been reinstalled. The only thing then connected to the machine was a small Microsoft USB mouse, and… when disconnecting it the taskbar and desktop appeared! I reconnected the mouse and noticed that it occasionally restarted itself, so it is most surely instable hardware, I am looking into getting a new laptop mouse right now!

Luckily enough the USB drive was immediately useful and booted my Windows disc at once! Very awesome, and most likely, perfectly normal. For some reason I have recently gotten used to machines not working as expected… there are more things that needs fixing.

All in all, I am very happy with my new small computer. The requirements I had which were fulfilled was:

Nice things included but which were not a must:

And that is about the whole computer spec! Before my purchase I was searching for machines that matched what I wanted, and I only got two results! The Samsung NC10 and the Asus Eee PC 1000HE, which explains why the specs of the machine very closely matches my requirements.

I got the NC10 mostly because it was readily available, both in stores for demoing and on mail order, while the EEE PC was on backorder just about everywhere. I did read some comments from people that do prefer the Asus, because of key placement and not up to spec battery life, but currently I am very happy with my Samsung machine :)