Posted on February 3, 2010 by Andreas Aronsson

According to people around me I apparently buy way more cameras than I could possibly have use for. Photography is one of my hobbies and because I have had at least some motivation for each purchase I figured I would make a list of my current cameras and the story behind each. Now if anyone do wonder I can point them in this general direction! The list is in chronological order. 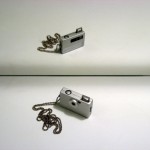 At the time this was the cheapest digital camera I could find, and I really wanted one while on student salary! The specs were quite bad, the only storage was built and could fit 26 pictures in BMP format, it ran on one AAA battery and had a flip-up optical viewfinder. Needless to say the picture quality was… well, horrible. Still, it was the first digital camera I owned! While it was incredibly portable with its’ tiny size it was almost embarrassing to use, as it definitely looks like a toy; but it was way too expensive to be a toy! It was also quite discomforting to use for several reasons. There is no screen for playback so you have to guess which image you are deleting if you dare trying, and as the built in storage was RAM you had to get home and download the pictures to your computer before the battery ran out, or the camera would be empty! 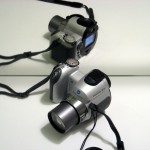 In the time between my first camera and this purchase I had borrowed a couple of cameras from other people so I had an idea of what I wanted. I picked this one because it had a good macro mode (1cm), a long zoom and video capabilities! But, it turned out to be a bit too bulky to discreetly take it with me, often it ended up at home instead. When I actually did bring it with me the extended lens almost made it look like a cannon, making it a bit awkward for both me and other people when cramped in a room at a party. And while it was awesome at the time, the 1.5″ screen now makes it appear incredibly dated. I also think the sensor might be damaged by photographing too many sunsets… 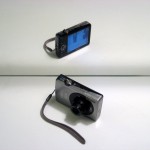 After having had a real job for a bit more than a year I was going on a skiing trip, and I decided I wanted a pocket friendly camera to bring with me. By then I had totally fallen out of the loop when it came to cameras, but I quickly settled for this one. It was small, had a metal body, a bit of zoom, a bit of macro, some manual settings, a video mode and most importantly time-lapse! And I also found the original power supply for very cheap, meaning the time-lapse function would be easy to use! Since I got it I have brought it along on so many events it’s crazy, and it has taken quite the beating! For this one I also bought a waterproof case for a specific project. 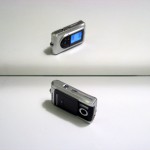 This was the first camera I bought specifically for video recording while skiing. It was totally cheap and totally crappy but it could surprisingly handle being snowed on, covered in ice and being part of crashes while still continuing to work! Though as the video held very low quality and had no sound the camera has not been useful for anything else, really, it was simply an experiment in the slopes. It did include a very useful camera case though, which is what I used to mount it on myself during skiing. Too many cameras come with just a thin bag. 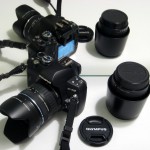 I had quite gotten interested in more advanced cameras, DSLRs to be specific, and after recommendations I imported a kit with two lenses from Germany. For a DSLR it was very cheap as it then already was last year’s model. I have since used it both for events and projects, the image quality helps a lot when doing photo manipulations. I also got into accessories through eBay, getting a cable remote, IR remote, RF remote, macro adapters, angled viewfinder etc. So far I have used the remotes the most, all of them! 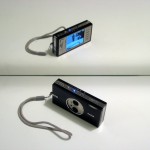 This is my second dedicated ski cam. It was an utter failure though as the lens cover malfunctioned after a single snow flake melting on it. I ended up holding it in my hand while speeding downhill, trying my best to keep it out of the snow. It sure was a challenge to try and keep it stable, especially when dodging trees, though as it rocks a very nice wide angle lens this helps hiding camera shake. Today it still have its’ uses and I might actually use it again for the upcoming skiing trip. If I can bother.

As my Ixus had become glitchy I decided to get a new camera for my pocket, and the high speed functions of this one caught my attention while I was doing product research. It is incredibly fun to use, though low light performance is mediocre making the high speed fun a bit limited, but that was to be expected. It lives best under a day lit sky, that’s for sure. Funny enough Casio announced a model revision last month; that one has a wide angle lens and better low light performance, but, as the high speed video specs are the same I guess I’ll keep this one until it breaks. 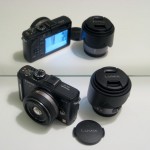 I got really hyped on this camera as I started to bump into articles about it. I always thought that my DSLR, even though it was the smallest on the market when I bought it, felt too big to bring along to social events and on trips. This one is fairly compact and can easily fit in my coat pocket, or even in my old camera bag in the space of the zoom lens! What also interested me was the video mode, as it has a much larger sensor than any of my video enabled compacts. I will try to have some fun with that :) Oh, and don’t forget the joys of the fast pancake lens either, with its’ shallow depth of field and awesome light intake! I’m completely sold on that one!

To buy the GF1 I actually sold my Canon camcorder, as I hardly ever brought it along or used it in projects. For some reason I feel that I would rather record videos with a camera than take photos with a camcorder… perhaps because that’s the way I have worked so far.

I also have to mention that I actually have ordered yet another camera! Yes, spank me silly. This time a GoPro HD Helmet HERO package. After randomly stumbling upon this video I just couldn’t help myself! Now I only have to find a helmet it can be attached to before I go skiing… and hope for the camera to arrive before I leave!

Randomness: On a completely different note. At one point I thought it would look more serious if I used “do not” instead of “don’t“, “I am” instead of “I’m” etc. but lately I have felt that it is looking quite odd and unrelaxed… and that it’s probably better to stay a bit more casual. Right there I noticed that I naturally used “It is” AND “it’s” because that’s how I would say it. I guess it might be best just to let the words flow and let it be.

2 Responses to Yet another camera?