Posted on February 17, 2010 by Andreas Aronsson

This is the first perspective figure that was almost completely drawn from scratch, without any supporting geometry exported from SketchUp. The only thing I had were the vanishing points and two lines. My mind had to bend in new ways to get around this one, and because of the rather complex geometry I also found I wanted it all in one color. No extra patterns or anything, because it felt like it became too confusing to look at.

What made this one a bit tricky to complete was the fact that the left side is rotated 45° in relation to the right side. I made a bunch of calculations of line number relationships before finalizing on a design. I also learned a bit about gradients in Illustrator when colorizing this one :) 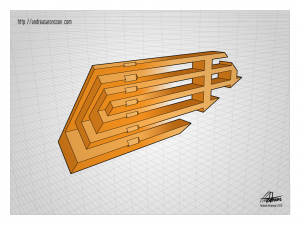 The left and right sides are very different, even if it’s one object. The general structure is rotated, surfaces turns into void, depths turns flat. Also notice that the right side has been cut so it would appear like the shape of the left side continues all the way. And on the left side there are cuts that does appear to be connected.