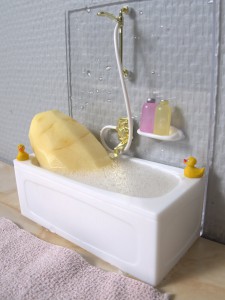 I’ve been following the terrific blog of David Bicho, a Photographer who shares very nice information of how he works and facts about photography! April the 18th he posted a contest where you could win a Canon lens, and naturally it was a photo contest. The theme was “a potato in a bathtub”. I found this very funny and instantly decided to enter the contest :)

After some brainstorming and juggling ideas with a few friends I had formed a plan. The day before the deadline, last Friday, I went to a toy store and bought a doll house bathroom set. I used this bathtub to let my potato get some relaxation time! He got hot water and soap bubbles, while being monitored by rubber ducks. A disappointment was that the ducks were molded solid and did not float, but at least they look cute!

The location was at a friend’s place as I had been invited over that evening; and because I would have no other opportunity to make the shoot that week I brought all my gear to her place! Preparing and shooting took all in all around 1½ hours. This was the first time I tried using my eBay flash equipment, and I have to say it makes working with a scene way more interesting!

Up top you can see the image I submitted to the contest, and below are a few behind the scene shots! 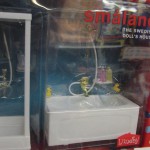 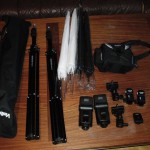 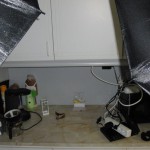 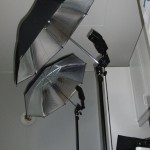 Oh, and the result of the contest? This Saturday I got an email from David himself with the message that I *shock* was the winner!

This is actually the first photo contest I have ever won, and I have lost count of how many I have participated in. Though often the theme of a contest is very broad, like “summer”, “motion”, “pets” or “Christmas” which can be just about anything. The theme this time was much more specific while still leaving many parameters up to creativity, I like it!

There was a few questions in the email and I couldn’t help myself so I just wrote down everything I thought of in my response; it was received so well that the reply was hacked into a fake interview and promptly posted! You can read it in Swedish or in English translated through Google.

All in all I thank Mr. Bicho for a fun contest and I greatly look forward to future contests that he might host :) I hope they will be of the same inspiring nature!

Update: Today, May 6th, I finally got an adapter to use the lens I won on the GF1! I have not had much time to experiment yet, but it fits quite nicely on there :) I can’t wait for Panasonic to release an official adapter, perhaps with more functionality than the one I got now, which does nothing except being a solid lump of metal. See pictures below! 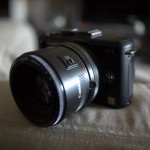 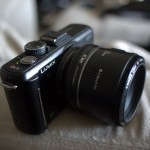 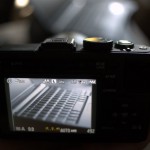 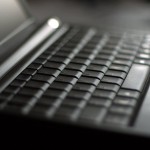