I got to make this one late at night and during Church activities, because I ended up making it so late in the month. That has become a trend the last six months, and when looking back, it was 12 months since I made more than one per month. I wonder if that says something about how my life looks right now.

When looking at this figure I myself don’t think it looks very impossible, that is mostly because it is hard to see that surfaces perfectly follow a vanishing point even if they only look slanted, slanted surfaces would be differently affected by perspective, but that is pretty hard to see. 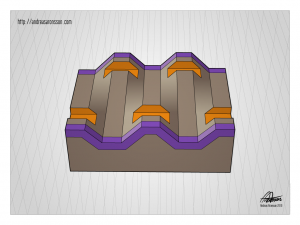 The top of the figure does not match the bottom.  All five surfaces in the middle which face upwards are all perfectly flat and facing the same direction, straight up.