Posted on October 5, 2010 by Andreas Aronsson 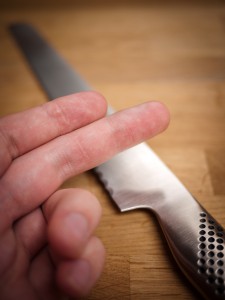 Time sure flies. Two years ago today I managed to cut my fingers. I think this marks the limit for the time the doctor gave my nerves to heal themselves, which means I might be stuck with my slightly numb and touchy fingers… forever! I’m so used to them now it will probably be fine :) The scars are still quite touchy though and sensitive for pressure.

What have I not said about the incident? I could go into detail of one of the experiences. When I was going to get sewed together again the doctor gave me anesthetics while my father told her that we have a family history of being slightly resistant or unresponsive to anesthetics. Of course she thought we were just talking nonsense and when she got back after fifteen minutes and I said that I was not sure it had worked it’s magic… she tried it by pinching my finger with a pincher! I’m not sure where she pinched, but because it was incredibly painful I guess it might actually have been near the wound. From my violent flinch and the scream she managed to realize that I still had feelings in my finger, and I was just staring at her with huge horrified eyes. She left me for another 10 minutes at that point.

When she got back I was obviously not feeling anything anymore, that would have been crazy right? As I mentioned in my original post I could feel the first three or four stitches; and I have to say that a needle puncturing your skin is quite unpleasant and painful. I guess it’s very noticeable in your fingers due to all the nerves so doing what people do in movies and sewing a leg or arm wound together might be less painful. Perhaps adrenaline helps if the wound was acquired moments earlier. In any case, after the anesthetics actually had started working I just lay there staring at the ceiling letting the time pass.

It took them quite a while to get it finished, as it kept gushing blood from the cuts. From medically inclined people I have talked to afterward they have wondered why on earth they didn’t constrain the blood flow to my arm so they could work without me getting drained of my health ketchup. I have also heard that the doctor I got is not very humane or careful… which I think I noticed. Apparently I should feel lucky to even have my fingers left! 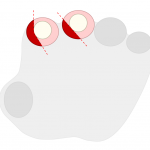 All in all from that experience I wonder how damage reports are interpreted. Mine did sound a bit lame as I had written “I cut my fingers with a bread knife.” which was the truth! I did add that it was a Global knife which supposedly is the sharpest consumer bread knife in the world! Clearly they did not suspect that I had rolled the blade off the bones in my fingers, hehe.

I get reminded of this whole event every time I hold a knife. If not by my own head, someone else who knows me will tell me to be careful or jokingly (I hope!) take the knife away from me, it’s a curse! And I promise, this is the last time I will mention this incident, I just felt it fitting as the doctor did mention two years.