Posted on November 12, 2010 by Andreas Aronsson

You might remember my last venture into turning my head upside down. Just after posting that I happened to bump into similar images on the net. The method used seemed easier while also generating easier to look at results, uhoh. I figured that doing another picture immediately after the first would be kind of repetitive, and using the method of the other pictures would of course be too simple for me, so I put it off for the future. The future that is now the past! Recently I got an idea how to complicate the simple method a bit and perhaps generate a uniquer image that way!

This portrait is constructed from two pictures taken simultaneously from two angles. The mixed response on Facebook after I uploaded it to my profile has been everything from laughs to crying ;) Below I will detail the process.

I had also placed two mirrors so I could see the screens of the GF1 cameras. I again wonder why they have no live output, even through composite, especially as they can be equipped with an external electronic viewfinder showing they can handle it. 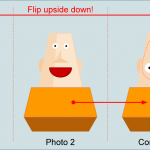 After sorting through all the photos I had taken I had 21 pairs left that were OK. Out of these I picked a final four pairs to work on in Photoshop. In the end the portrait displayed in this post was the one I got happiest with, even though it looks kind of scary, no?

The actual editing was basically to flip one picture upside down, then extract the face and place it in the other picture. If the face matched the other image it was a piece of cake!

After compositing I adjusted brightness/contrast, saturation, added some lens blur and cropped it, and that’s it :) Voilà!

(Illustrations were made quick and dirty in Google Docs in their drawing utility!)

This I knew before getting started with the project, I had to have my head level for the images to go together, but I promptly forgot about it after I started setting up the gear. This consequentially rendered a fair amount of my images useless. Basically, if you angle your head towards either camera, up or down, the proportions will be off and the face will appear longer in the picture taken by that camera you point your nose at.

Something I had figured should work was turning my head to either side. Though I discovered that this generated pairs which did not match as well due to my face not being entirely flat, which caused the end results to look pretty wonky.

As the pairs were matched pictures either one of them could be used as a base, meaning the only part of the other picture to be used was the face. What decided which picture to pick as a base was simply which camera I had been looking into when pressing the shutter release. I think in general it was nicer to use the below picture as a base as the above picture showed mostly hair, being from above and all.

What delayed the project and had me working late into the night were technical issues: