Is this really me?

Posted on November 22, 2010 by Andreas Aronsson

If you can, click the image quickly before reading any other text and try to figure out what the concept is, except that there are two of me fused together. 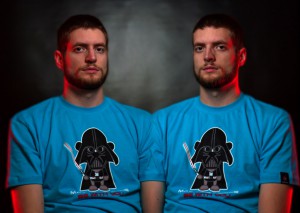 I will try to write some generic text here as to not spoil it immediately.

And this is a line just to add some extra space before the text below.

How do you like my shirt? My neighbor gave it to me! Very kind.

Are you tired of thinking yet? Ok, lets get into the details.

This photo was made after a friend gave me an idea when pondering what to do for my next photo project. His idea was simply to make a photo where my face is symmetrical, a fairly classical theme, but I took it a step further as I always do.

To easily make your face symmetrical you would simply get a picture where you are facing straight into the lens and copy one side to the other and be done with it. To have the lighting match you would have to use a flash on the same vertical as the lens. 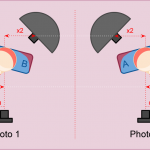 What we did was to make symmetrical faces while sitting at an angle. For one symmetrical face you need two pictures that are identical but mirrored. To achieve this we setup all the gear and marked out the mirror positions for the flashes and in what direction I should turn the chair.

While I sat on the chair my friend pushed the shutter release. After taking the first picture I rotated the chair with my legs while keeping the same face and pose and my friend moved the flashes to mirror the lighting, then we took the second picture. In reality we took a number of pictures, but you only need one pair. 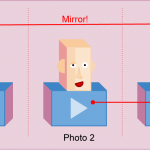 The editing was again quite easy as we got a pair of matching images out of the ones we shot. This means they looked like they were mirrored copies, but they are actually different scenes with me looking the other way and the lighting moved.

To make the composite I simply mirrored one of the images, realigned it so the faces would match and then masked out everything but one half of my face. This makes the entire face being represented by the same half twice.

After finishing a face which was built upon the right side of my face I made the other version too, which was a face based on only the left side of my face. With both these pictures ready it was quite easy to merge them as you see up top, mostly because they were (again) like mirror copies of each other.

Do you need help seeing that they are symmetrical? Look at the hair in my forehead, the mouth and the nose.

A fun thing is that it does look like it’s just a picture that has been mirrored, but take a closer look at the print on the shirt :) Fun eh?