This one I drew on the bus to where the skiing camp of the year was to be. During the week I spent a few of the occasions where there was nothing to do on drawing it on my laptop. I was responsible for the projector and everything that was to be shown on it, so I quite naturally had my computer ready some time before that, which made some time available. The evening I finished it, which incidentally is just now, when I write this, I had a bad back ache from the skiing, so this art was finished during much pain! 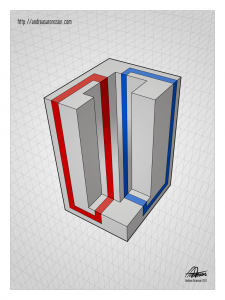 On the inside of this figure, the center pillar that starts at the bottom turns into a hole at the top.