To get this one to fit together I had to chop away at the outer corners, but I think it made it look better than I had originally planned, but it at the same time became a bit harder to wrap your head around. That is a constant battle, to keep the impossibilities simple enough so they can be appreciated, while not making them so simple they become boring or not unique enough. 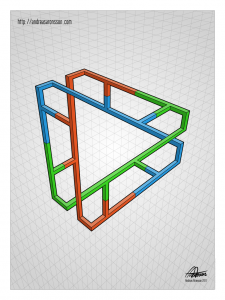 This is basically a tribar that instead of closing up after three bars goes into a second tribar effectively making it a hexabar. The two tribars are connected by additional bars throughout the intertwining, at most points things turn impossible as soon as you look around it.