In March I went to an IT fair through my employer so I got to travel by train (in Sweden) for the first time in many years! As the trip duration was more than two hours I had plenty of time to digitize this illusion. I had planned this ahead of time so I had a drawn sketch prepared. Why I found working on the train especially inspiring was because of the habits of the late Oscar Reutersvärd who is credited with creating the first impossible figure. He drew most of his impossible art on the train he took to work according to a book I have read. 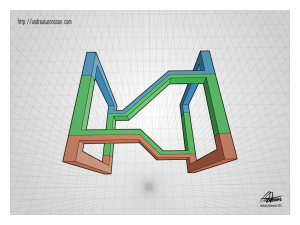 The top beams from both directions are connected to the bottom at the other side, even while being perfectly horizontal.