During ten days in May me and a friend were in the United States of America spending some vacation time. We lived about a week in New York but the main event, which was the initial motivation for the entire trip, was a Halo LAN Party at the HBO HQ in Bethany, Connecticut. At this LAN I got the opportunity to setup a group shot after my liking. I was given this honor prior to flying overseas so I had the idea fleshed out beforehand, but I had not practically confirmed that it would work with my equipment!

The day of the shooting I was quite anxious up to the point when I started setting it up, just after lunch time. You can see my funky Google Docs sketch below, it was way past midnight when I made it and it is purely for visualizing the concept!

The original method depicted in the sketch would use two poles with a string suspended in the air between them. As a subject you would match your height with the string and place yourself at that distance to the camera. Doing it this way would have generated a more accurate result, but realizing that would take a really long time with 30 people I instead had the string put on the ground and had the tallest and shortest (we thought) person stand at either end as references.

The point was to have these two people look like they were equally tall in the photograph, and to pick out where to place them I used the edge of the grass and the overlay grid on my camera to judge when they were at the correct distances, with the less tall person closer to the camera. 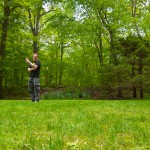 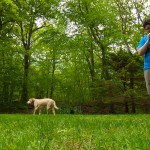 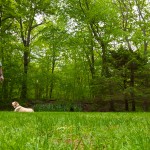 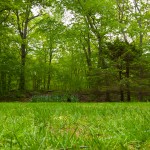 After getting satisfactory results with these two people the group waited for people to come back from shopping. It was about to start raining so the entire shoot almost got cancelled, but the rain decided to wait for us to finish :) And actually, now I’m not even sure if it rained much afterwards at all… oh well.

When the shoppers returned everyone was called out and I began instructing people to sort themselves in order of height along the string on the ground. This was the easiest and quickest way of doing it, instead of trying to manually match everyone up to the guide lines in the camera.

As I said previously I had to move the camera back a few times for everyone to fit, this partially because I could not imagine how much 30 people on a line would take, and because people were a bit more uncomfortable huddling together with (almost) complete strangers than I had imagined! In the end everyone actually fit inside the shot though :)

To get myself in the picture as well I had brought a remote trigger, but while everyone was doing their best posing I had trouble getting it to work from where I stood, which was quite stressful! I immediately wondered if it was bad batteries, interference from all the wireless devices or the weather. Of course I dismissed any possibility of it being user error! After flailing the remote about for a few pressured seconds I just had to hold it in the hand facing the camera, not the one that was hidden behind the person in front of me. The result is below! 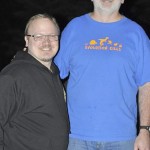 I kept the aperture at f/11 to get everyone sharp. What I had not considered was the lens distortion and chromatic aberration at the edges, but in the end I could adjust it well enough to end up with a satisfactory result, I think, even though everyone is not entirely the same height and the ground wasn’t exactly flat… To the left is a photo of the leftmost and rightmost people to give you some reference to the actual height difference. Shamelessly ripped from Facebook!

It is my intention to write up the rest of this trip separately, hopefully not too distant into the future, but as usual I have too much going on all the time. (I still have not had the time or brains to blog my trip to Japan, Greece or the last two skiing trips -_- urgh)