Posted on September 12, 2011 by Andreas Aronsson

This April 1st the company group I currently work for allowed for employees to take photos during the workday, because the date was the 20th anniversary of the group, and the reason behind this exception was that a photo book would be created out of all these pictures. To motivate people to take pictures they arranged a photo contest where people could submit their best pictures for a chance to win weekend trips or a restaurant visit. The theme was “One Day at Swedwood” and the single rule was that “The photo must represent Swedwood according to the employee“, where Swedwood is the company group, and well… I did my best to represent what a workday at Swedwood means to me! 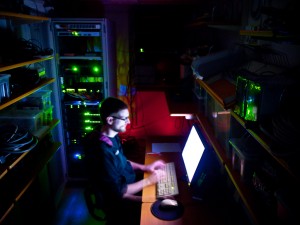 Here I had propped the camera on top of a fire proof cabinet inside our tiny server room, the shutter was set to 30 seconds. For me it was almost entirely dark in the room, as my night vision is kind of sucky, and the lighting you see is generated by the status LEDs on various equipment. A fun fact is that the screen was set to just 1/100 in brightness, the lowest setting before it would turn entirely black!

In the book my picture was featured on the cover (!!) and as picture #6 on page 17. Unluckily only the five first pictures out of all 136 were rewarded with prizes, but I was close! And interestingly the picture which won the first prize was not featured on the cover, only two out of the five winning pictures were! Perhaps they won due to what they represented and not because of how they looked :) 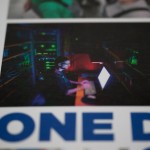 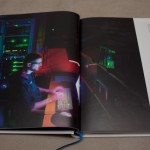 To my surprise they also included my picture description, unedited. I was kind of mocking the entire concept of representing a happy company by making a very dark and lonely picture. The description reads:

“This picture represents how it feels to be the sole member of the local IT department, which means doing most work in solitude with mindless machines as your only company.”