This year (2011) I was very worn out and stressed when I finally accepted that if I was going to make a Christmas card I had to do it now and then. That was the 18th of December. The official date to post cards to be sure they make it to the recipient in time was December the 16th. Oh well, that has not stopped be me before!

First things first, I did not really have an idea. This is the fourth year in a row I make a custom Christmas card, the one I made last year was a bit too ambitious, and I was already sick when I did it so afterwards I was in bed for a week with fever, heh. The years before that I added myself to Pixar movies, which is partially what inspired me this year.

When I was away taking a speed course in motorcycling I lived at my cousins’ place, and they are very much Harry Potter geeks, undeniably! While there I half participated in a Harry Potter movie marathon which we ended with seeing the last movie in the theater, as it was on around that time. As this week is what was most memorable from 2011, it was very intensive and slightly crazy, it just had to be the inspiration for my card.

I started looking around for suitable photos from the film in which I could insert myself, I was first eyeing a motorcycle picture where Hagrid is just leaving with Harry, but I couldn’t find it in a good enough quality, in the end I used a picture with professor Dumbledore instead. Lets start with how I shot the photo of me.

To get myself to sit at the right angle, at the right distance, and have my feet in the right spot I used my old and quite crappy projector to display the Dumbledore photo on the backdrop I had picked. It was my bed cover, the best colored material I got to match the tonality of the photo to make extraction of myself easier, avoiding getting too contrasty edges. 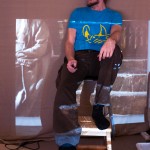 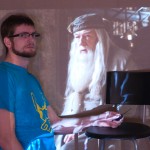 After matching the size of my head with Dumbledore’s, which was a bit tricky as his beard and hair covers most of his face in addition to him wearing a hat, I fixed supports for my feet to match the steps I would sit on in the picture. When happy with that I turned the projector off and set up lighting to match the other picture.

I used two flashes, one close to where I was sitting with a white translucent umbrella for the light coming from the left and one behind the camera as a fill light with a black reflective umbrella. In addition I had a reflector to the right to brighten up the shadows a bit. I used the reflective umbrella on the fill flash because I had to use it in slave mode due to the camera only triggering one flash if I used cables for both. Slightly annoying. At this point I had spent an hour on setting things up. 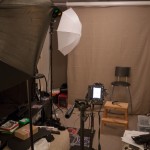 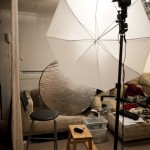 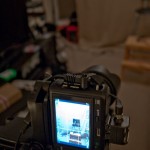 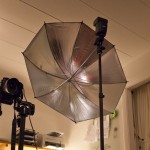 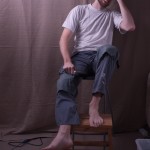 The last thing to do was to come up with a good pose which would make sense. I am holding a paintbrush I had borrowed from my parents garage, I should probably have included a can of paint too but I was too tired to match that up too. The final concept was to make it appear as if I had painted the professor with red paint, to force him into a Santa role, and that he would not be very enthusiastic about it. After yet another hour when I finally ended up with a picture I liked, which happened to be one of the first photos in the final series I took, I jumped into Photoshop. 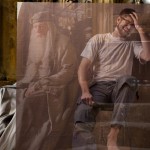 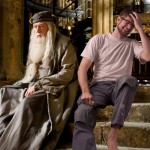 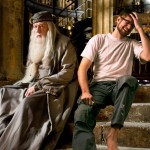 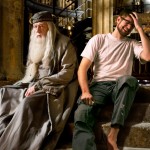 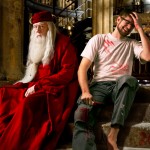 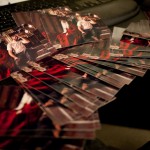 I didn’t actually send the cards until the 22nd. I did some finishing touches in Photoshop the days after the actual shoot before I could print them and then I wrote a personal greeting on each one. It would just feel like I made an incomplete product if I did not use the space available to make the card personal for the receiver. As for delivery, It would seem like at least the local cards arrived on the 23rd, I had written most greetings on them assuming they would arrive after the weekend, but oh well.