Posted on February 15, 2012 by Andreas Aronsson

As the last figure was so stressed, making it during free hours on a business trip, I figured I would plan ahead for December. That failed pretty hard. I started this one the week after Christmas, and I did the finishing touches on New Year’s Eve, even. Doing this I have actually kept up making at least one per month for four years, even if the stress level at work has ramped up the last three, an exhausted mind is not optimal for creative work. I might show a graph of this later. Update: Chart! 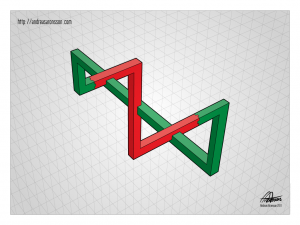 This is basically a broken tribar twisted out of shape. If you follow the figure one way or the other you will keep going up or down as well as forwards or backwards, continuously.