After I had finished this one I realized I could make it even more impossible by simply putting things that should be in front behind instead. Then I remembered my conclusion from half a decade ago, that too many impossibilities together just becomes confusing, it’s often better to focus on once concept. Unless, of course, confusion is what you want :P 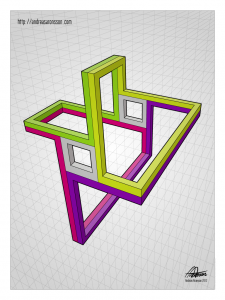 Two sides are mirrored versions of each other but still connected like if they were symmetrical.