A while back I experimented with making images with the Droste effect. I planned to do some serious pictures but I never got so far as the plugin I was using had a few issues with my installation, and now I no longer have the required software.  Perhaps in the future.

For this Facebook banner I did the effect manually in Photoshop. The montage was actually very straight forward to do, I hardly even have to make a list! Here is one anyway.

And yeah, that’s about it. I did add some shadows and as always adjust colors, contrast etc. Nothing too complex. The hardest part was actually framing my portrait, I didn’t want more than one copy of my face to be visible as the Droste effect was supposed to be a surprise when people view my profile. And as usual all of this was done late one night when I had the inspiration, it was a bit tricky to not look sleepy though.

The banner and portrait was up for quite some time, during that time I actually had to update the set because Facebook changed the size of the portrait that is shown on the profile page, which made the portrait look separate from the banner due to misalignment! Still, I have realized that on mobile devices the portrait jumps around everywhere and the banner is cropped differently so it will always be broken for someone. 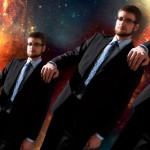 As I think the compression shown in the top image just looks awful I will include the full banner again here to the right, then using the source file instead of a screenshot. I’ll skip the high resolution of the portrait as it just shows one person anyway, making it fairly uninteresting. To get the high resolution for the portrait I edited the whole project in as high a resolution I could, depending on the original photograph, and then I just scaled down the banner when I exported.