One Sunday in February this year I had enjoyed a Sunday lunch at my parents’ place and was heading home. With a belly full of food and driving on a very familiar road for the hundredths time, I was very relaxed, and my destination was a one man show by a Swedish comedian so I had my mind set on that.

Suddenly, after exiting a tiny around-about that is next to a gas station, the world started spinning. It wasn’t my head, but I did not immediately understand what was going on. What had actually happened was that as I exited the round-about, which is so tiny I often hardly lower my speed, the back end of the car had started skidding.

Even if it was winter, the road looked dark enough to be safe, meaning the asphalt was visible. Instead it was covered by a very thin layer of ice. As I only have friction tires, no dubs, my faulty assumptions made the situation quite dangerous. The entire thing happened in probably 4-6 seconds, I’ll try to describe what I think happened from my post-event analysis.

Just after exiting the roundabout, as the weight of the car shifted from the exit turn, the end of the car started to skid so the vehicle aimed to the right and I saw the world pass me by sideways. Now, not really thinking, I stepped on the accelerator to fix this. As I have a front-wheel drive car the basic technique to counter a slide is to turn your wheels in the direction you want to go and step on it.

Sure, this turned the car around and I narrowly missed a lamp post, instead I smashed into a aluminium sign. I only heard the noise, I didn’t know if I had actually hit a lamp post or even a person, but as I wasn’t breaking I headed out onto the road again, meeting oncoming traffic.

Still acting on instinct I swerved right again to counter the second skid, by this time my anti-spin system had given up and my wheels where just polishing the street, as you can see from the tracks in the video above. Again I got up on the sidewalk, but now reason took won over my instincts and I hit the breaks. Luckily as my front wheels were not accelerating the car anymore it stopped quite promptly, just short of hitting a low stone wall lining the corner property.

During the event I had not had the time to panic, or anything like that. When I finally stood still what had happened started to sink in, but the first thing that entered my head was that I cannot park on the sidewalk. Driving back to the gas station I to my relief didn’t see any victims, only the broken sign. When I reported the accident to the cashier of the gas station she hadn’t actually noticed anything, but who would? It happened in a few seconds, and it probably flashed by on the surveillance monitor while she was doing something else.

This was my first serious traffic incident, and I am very happy that nobody was harmed and that the material damage was fairly minimal. As you can guess I drove very carefully the rest of the winter, and probably a bit more careful all around! 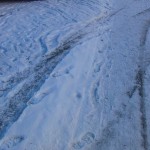 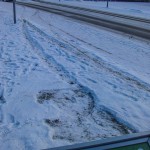 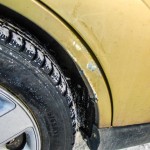 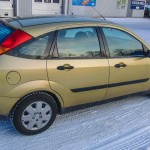 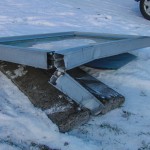 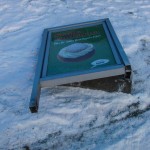 For some reason this gallery refuses to center, annoys me to no end.

One Response to Black Ice