Posted on August 8, 2012 by Andreas Aronsson

This will probably be the last post about my previous employment, unless I have forgotten something. When I quit a little more than four months ago I wanted to leave something behind, after all I had spent five years of my young adult life there, they should at least have something to remember me by. I had several plans, but not all of them were possible to realize. In the end three projects were prepared but only two were actually successfully executed.

The most subtle surprise was a system message on the PBX which only gets played back when someone internally calls a phone that is turned off. Most often people set their phone status to gone for the day instead of turning it off (or not status at all), so I figured it would take some time until they discovered my hidden message.

They actually called me two weeks later to query me about it, they had noticed it withing the first week, I think it was. I ended up sending them instructions on how to change the message for something else, but I’m not sure if they actually did so.

The message itself was recorded around midnight when I was packing up my office, while my client was doing data backups, and went along the lines of “Hello, no this is Andreas! The person you called has dropped their phone in the toilet so I am installing this new one right now. It will be ready soon so call back in a few minutes, ok? Bye!“.

My second gift was a poster I put up outside of my office, as you might have noticed in my video in this post. I spent the late evenings that same week looking through years of photographs, all the time during which I had been employed there. In total I collected and used 620 photos, taken with eleven different cameras/phones (not all mine) and sorted in chronological order. A few pictures were added to include my name, the dates which I had been employed, the year thresholds and a last picture saying “Tack!” which is Swedish for “Thanks!”. 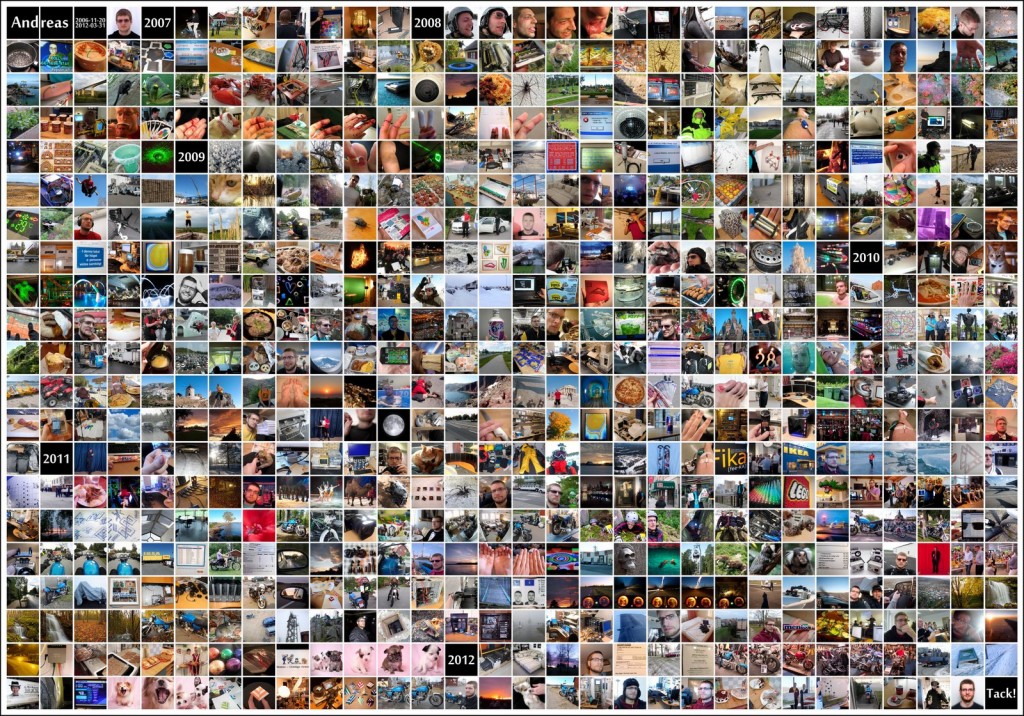 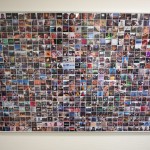 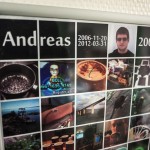 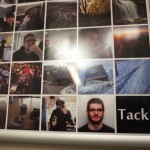 Every picture collected carries some importance to me, they depicting memorable moments and most of them has a story that might not be very obvious by just looking at the picture. The response to the poster has been awesome, among other things I was told that “Everyone that quits should create a poster like this!” which sure is a nice thing to hear!

The third thing I had prepared was a custom desktop that would mimic the default one but use my photos and contain a small surprise. As Swedwood is owned by IKEA we were at that time running IKEA’s internal IT systems (right now Swedwood is migrating to their own). It’s probably a bad idea to go into more detail, but while using the IKEA system we got their internal desktop background, a live page with links and a few pictures of products. I was able to edit the local client profile for the background URL in the management utility, but no matter what I tried it would not go live.

As I had spent some time creating my own background I ended up calling the IKEA helpdesk and submitting a ticket about this, pleading for help to do this last surprise for my coworkers of five years, but they could not help as it seems the value for the background was locked on a higher level.

Much later I got forwarded an email chain from far up the IT chain from both Swedwood and IKEA where they had discussed my helpdesk ticket, and the final say was that fiddling with things like this was pretty much sabotage and very unprofessional! Of course, to me, it seemed quite innocent as just changing the desktop is a trivial thing. But, if you are the person responsible for the stability of the general IT systems throughout the entire IKEA organization I guess messing with stuff like this seems like a very unnecessary risk and entirely pointless. It made me a bit sad, but I could understand where they were coming from so I let it rest.

Here, for you pleasure only, is the original background and my edited background. The version that I had planned to go live had a pause for about 15 minutes before it would play the animation. In this version the pause is only five seconds.

Oh, and a last detail. To understand the animation you might need to know that I have a half-lazy eye, so when I am tired I very often has only one eye open. This bad habit is further promoted by a refraction error in my right eye which makes that eye much more prone to get blinded by light, so outdoors on  a sunny day you can often see me with my right eye closed. This is also why I have glasses that are photo-chromatic, it helps.

As a side effect from this habit is that it kind of helps me identify with how one-eyed people perceives the world, but it also helps me see illusions in everyday life as I lose much of my depth perception with one eye closed. I do need to try to keep them both open though, to appear normal, you know. If you have ever met me you have probably seen this behavior of mine.

One Response to Farewell Gifts