Posted on January 6, 2013 by Andreas Aronsson

Above you can see a time-lapse done with my webcam from when I visited DreamHack Winter 2012. Right now I’m at zero income, and a table spot is quite expensive, but as I had never brought a machine when going to DreamHack before I put down the money to get the experience.

The first hassle was to get all my gear packed. I brought my desktop computer as I suspected I was going to play games and perhaps do some editing and/or artsy stuff. I also packed a security cable, padlock, Kensington lock and things like that as I was wary to get stuff stolen, mostly because I’m understandably not really in a position to buy replacements.

I arrived with a friend quite early on the Thursday, with the event lasting until Sunday morning,  and as he was a DreamHack veteran he quickly went inside with his golden ticket and everything in his chair. Yes, you can/should bring your own chair if you want to sit comfortable. Myself I brought a tiny office chair which only fit my computer, put a backpack on and carried my monitor under my arm. If I ever go to DreamHack again I’m definitely taking a lighter screen, or even just a laptop, urgh. After standing in line and getting a bracelet I descended into hall C which was where we would spend the next couple of days, my left arm incredibly weak after holding my screen while standing in line.

Unpacking my gear I realized just how small a space I had to fit everything in, 80 x 60 cm seemed much larger in my head. Luckily my older brother had the spot right next to me and he was only bringing a laptop which meant I could use some of his space. It is a bad idea to bring a 24″ behemoth screen (large footprint).

Even though my plan was to not spend much money at the event itself I was pretty much forced to get a good headset as it became apparent it was impossible to hear what anyone said unless you had a VOIP group call going. And this even when we sat in the calm hall! In the other halls where they had stages and music blaring you had to resort to text chat or sign language even with a headset on. 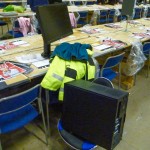 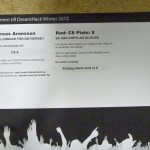 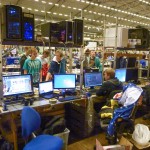 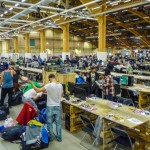 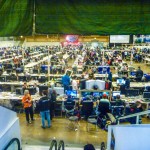 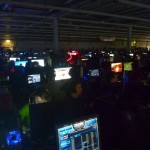 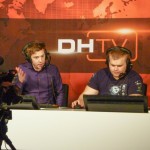 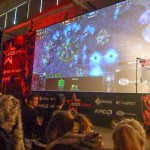 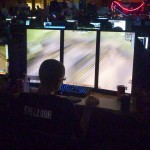 It was my original wish to participate in some of the creative contests, but in the darkness and noise I didn’t get much more done than setting up a webcam feed for friends and family. I had also read beforehand that you could submit (pretty much) anything you had done previously which made it seem pointless to try and do anything right there and then. Instead I gamed more than I had done in ages, watched tournaments, went sightseeing and met more friends and even relatives :P

As for games, I got to play Starcraft 2 customs, Counter Strike, League of Legends, Hawken (closed) beta, Trackmania, WC3 Dota and probably a bunch more games I cannot remember right now. When looking around it seemed like gaming sure was the main activity for pretty much everyone. Back when I was still a teenager and I was at slightly smaller LANs filesharing was more prominent, but then everyone didn’t have broadband at home and it was still legal-ish in Sweden to fileshare. On the live network statistics for the DreamHack Internet connection only games were listed as the biggest sources of traffic, which makes me wonder if that was the whole story. In any case here is a screen cap of the stats if the next LAN has already taken place when you read this :) 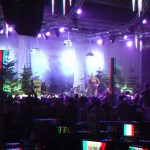 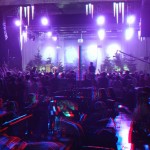 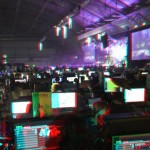 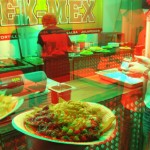 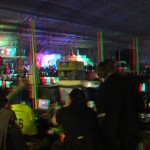 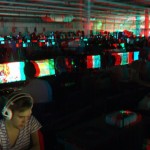 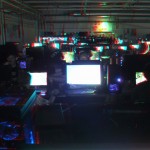 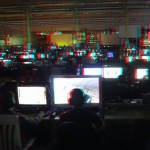 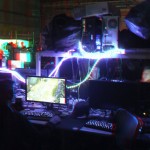 General thoughts about the spectacle? Quite nice. There were exhibitions from various sponsors, a few shops, food places. Lots of crew to keep things in order, supply medical help, directions, registrations etc. People seemed calm most of the time, no fights that I saw and I didn’t hear about anyone losing any gear. There are a few odd habits that apparently has grown over the years, like randomly applauding which spreads through the hall, or more oddly, screaming “Hallå!” (hello) and people would respond in sequence for a while. A good way to stay awake I guess.

One thing though, the center area between the halls which contained a section of console/arcade gaming and also the bathrooms had the most crazy smell/stench! I tried to hold my breath everything I passed through there and I do wonder if the people who sat there still have a sense of smell. Though, as I know from previous LAN (and farm) experience a person can get used to mostly any smell with enough exposure.

Sadly when I had finally gotten used to the place it was all over. As it was my first time there for real I was fairly stressed out in the beginning, wondering what to expect, what to do, where to go. Now afterwards it feels like I could have spent more time in the exhibitions, watching pro gamers play and just socializing. Also, taking more photos, perhaps panoramas with a tripod. This time around I spent most of my time just playing games with the people I was there with which essentially made it feel like I could just as well have been on a smaller LAN.

Not really sure what personal benefit visiting such a large LAN is except experiencing the spectacle. My guess is that it has more meaning if you have an online gaming community with members gathering from all over the place, that would actually be really neat, though I’m not seeing myself doing anything like that anytime soon. The last time I had such a large group to play with was during my WoW days, days which I don’t look upon with much fondness.