Oh, how hysterical! These illusion posts I clone and just swap out the content. I haven’t bothered to make a template or anything because sometimes I have included a video or extra images. When adding this one, the first for 2013, I noticed the previous one had the wrong year in the title.

Then, to my wonderment, I noticed that every single impossible figure post for 2012 had 2011 in the title! For some reason I had only updated the month and day and not the year, and hadn’t noticed my mistake until now! Crazy for sure! All fixed now though, which has changed my links, but it’ll have to do.

This impossible figure is based on a quite old sketch. I dug it up in my archive and I felt that I had to do it. It was a bit hard to figure out, I had to sketch up a new version where I marked up which surfaces that would share the same width across the image. Almost the entire thing is drawn in relation to just a single side. 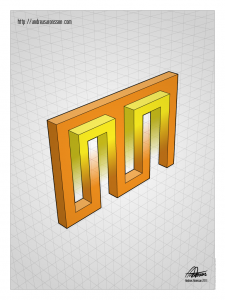 If you follow this snake up and down you will notice that surfaces change direction between up and down or even into just air.