In this illusion the top and bottom elements are not actually impossible attached to the rest. While What they do though is add spacial illusions, as in they line up with both the center frame and the vertical bars on the side to appear as if they were in two different spaces at the same time. The three frames could either be on top of each other or if you wander with your eyes a bit they can appear to be on the same plane. 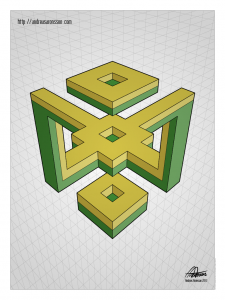 No matter in which direction you travel around the center construction you will always end up at the same place even if should end up somewhere else!