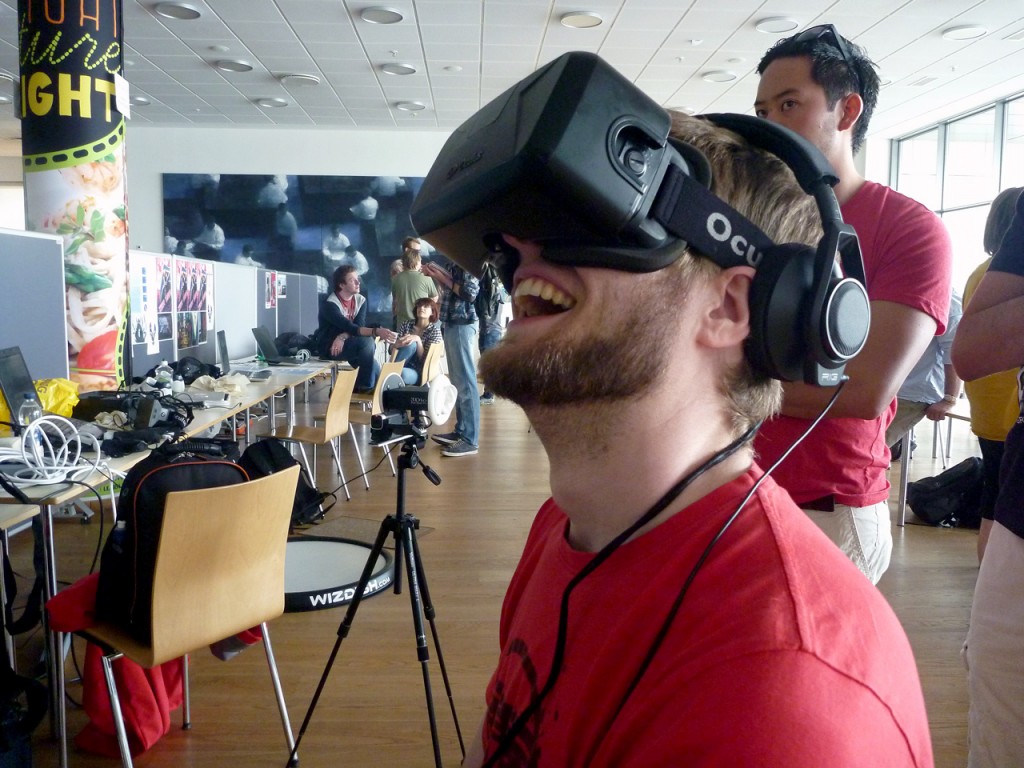 Earlier this year, in May, I went to Copenhagen University to try out the Oculus Rift DK2. Nowadays I hang out quite a bit over at Reddit, and in VRSweden an Oculus employee posted the he would demo the new developer headset on a free event, Shayla Games! This was the weekend after the professional conference Nordic Game in Malmö, which a bit too expensive to go to just for fun, but it meant a bunch of industry people were in the vicinity and could attend Shayla Games :)

I happened to be going out camping the same weekend which had been planned for a long time, so I would have to leave early to get to Copenhagen in time. Funny enough that night it was a thunderstorm, and we slept in an open shelter next to a lake, not many hours were spent sleeping! The sounds were awesome though… I wish I had had an audio recorder with me!

In the morning I had to leave really early to drive back to the apartment, pack all my stuff and wash up, and then take the train all the way to Copenhagen. I managed to forget my wallet in my laundry though, so I missed the first train. The biggest setback of the day!

A few hours later I was walking around Copenhagen, but I had forgotten to note the address for the event, and I naturally had no Internet on my phone as it’s in another country… but luckily parts of Google Maps had been cached and I remembered which station to go to and how the map looked, so I navigated that way! I was expecting to never finding my way there!

When finally at the campus I had no idea which building to go to, so I walked around looking for an obvious sign for the event. Finally I happened upon a map over the area and just decided to go to the main building as it had an information desk. Voila, that was the place for the event!

After sitting down for a while to cool down I finally found the DK2 demo corner and got in line, if it could be called that, it was more of a spectator crowd. I asked the people from Oculus if I could record some video, and as it was ok I set up my camera! When it was finally my turn I got to try the Tower Defense demo, later on I tried Couch Knights and even a test build of SUPERHOT. I have since put two videos online, one visible just below which has more shots of different people as well as some of the surroundings and another one further down the page which revisits my first go in the DK2. These were recorded with binaural audio so it is beneficial to use headphones! Also, full screen helps selling the effect!

Be aware that all my comments here are colored from having used the DK1 during more than a year and the whole time I’ve used the A-cups, which I’ve heard has the smallest sweet-spot of sharpness, and I’ve also had the screen assembly set as far from my face as possible which causes a lower FoV according to my own tests, this because I otherwise have a tendency to hit the lenses with my eyelashes.

The DK2 appears to have larger optics, and for me it this was the most apparent upgrade. In the DK1 I can see a defined circle around my vision, but in the DK2 I could not appreciate where my field of view ended even while rotating my eyes as far as I could! Again I have been running my DK1 in a setting that reduces FoV, for comfort, but the DK2 seems to be comfortable for even while delivering a wide FoV.

The sweet-spot where everything is sharp definitely feels larger now, at least in comparison to what I’m used to in the DK1 with the A lenses. In the DK1 I notice the limited sharpness mostly when I try to read text, and none of the demos presented actually had any text so that left me without that point of comparison. That said, I didn’t have any problems seeing things sharply no matter where I looked, or at least that was my impression.

This is one thing many people are curious about, but I’m sorry to say I had a really hard time comparing the new and old kit. I’ve gotten so used to the effect in the DK1 so the effect in the DK2 mostly felt different, which is not strange as the new panel has a pentile sub-pixel arrangement meaning the screen-door is diagonal. I will have to switch back and forth between the kits to really tell, or take photographs through the lenses. That said, the resolution is obviously higher, but I can still easily notice the sub-pixels if I look for them. I don’t want to sound overly negative, but to me it feels like there are more color elements but also more black between them. This might be affected by the fact I tried a very dark demo as my first experience in the DK2, and with less sub pixels lit up it will appear as if there is more black space between them.

As you might have seen in the videos above I tried shaking my head about. The headset probably sat a bit loose on my head because it shifted a bit, but whatever I did I could not detect any motion blur! Something that you get as soon as you move your head in the DK1. This felt like a much more natural and comfortable experience for sure, and while the panel runs at 75 Hz I could not detect any flickering, which was possible for me on a CRT in the olden days. Perhaps being closed off from the outside actually helps! At home I have over-clocked my DK1 to 71 Hz so I was conditioned to the fluidity, but that also made motion blur and smearing worse, so getting that same fluidity with absolutely none of those negative effects is kind of awesome.

This is what I wanted to try out the most, especially after having messed around with the Hydra to get a small taste of what to come, and it is something Oculus themselves have talked about for a long time.

It is very responsive, I could not feel any latency even if I tried, and I was quite surprised by just how far I could rotate my head before it lost tracking. I could definitely span the angles that are comfortable for a seated position without issues, the camera seems to keep up when looking straight to the sides and probably a bit backwards too.

The tracking volume is also quite large, I was able to move around in the scene quite a bit. The camera was situated fairly low and I think it might be aimed a bit downwards too as standing broke the tracking quickly but I could crouch down pretty far before loosing it. Again I was very impressed with how well it could keep up, even with my shenanigans!

I only bumped into one small issue. At one point in the video above you can see me moving forwards and then backwards several times. This is because when I was moving from the camera it felt like the position was updated in small ticks. I am guessing it could be an issue in the software as going forwards had no issues at all, so the resolution should be enough, or it could actually have been a frame-rate issue for all I know as when moving backwards new stuff pops into view. I also only noticed this in the Tower Defense demo and not in any of the others.

I got a bit unsure of how to hold the DK2 when I first got it in my hands. The IR shield leaves less area for your fingers to keep hold of it than the DK1, and I was unsure if I would actually move the screen assembly or not. Nothing happened even if I fumbled a bit though so it was probably fine!

The cable was completely unnoticeable for me even when moving about to the degree I did, I could just as well have been wireless. I think I’ll have to watch my own video again to actually see where the cable went. But, even if I used the DK2 several times, I never realized I was tethered whilst in there. In the DK1 I get reminded of the cable fairly often, because it is relatively short in comparison.

This has little to do with the hardware, but could still be interesting!

I think the Tower Defense demo is very nice to look at, but it could just as well have been a non-interactive experience as so much is going on and there is so much to take in. Just moving your head through the demo is enough to keep one occupied, to appreciate all the details. I really liked how I could lean in and look at stuff up close, I could even put my face into to the lava! To look under bridges to see areas otherwise invisible with a fixed camera is magical!

Couch Knights was very nice, I have been thinking that it looks a bit lame on a screen, but being in it is much more interesting for sure. The room feels authentic, the in-game body feels like my own and it is fantastic fun to steer a character like a radio controlled vehicle! It was single player as we only had one DK2 and one computer at the location, but it was still very enjoyable with proper physics to play around with. I leaned in close to look at my character and fire missiles into my face, this ability to get closer to see details is killer, so much potential!

Some of us got the chance to try SUPERHOT in the DK2, which worked really well! They said it was glitchy but I had no issues at all. As in real life, seeing the distance to stuff heading straight for you is really hard, but leaning side to side reveals everything! It is a very natural mechanic with the positional tracking of the DK2! I backed this game on day one and I’m looking forward to playing it in VR again upon release!

The DK2 is a great improvement over the DK1, positional tracking and image quality is great, I’m happy that I pre-ordered and am excited to hopefully get my hands on one in the following weeks. Oculus themselves have said that delivery will begin… next week! Exciting times.

I’m very happy that I took my time to travel to Denmark, I had an awesome time even while sleep-exhausted-crazy. I got to talk about everything VR with all kinds of people, users from Reddit, the guys from Oculus and whoever! Oh, and with some of the developers of SUPERHOT which were attending!

Quite a few people asked about my camera setup too, about the mike, apparently it’s not common knowledge that it exists even among audio people which I found interesting as I had watched it for years before getting one.

An Oculus employee also saved my life by pushing pizza down my throat, I’m very grateful for this act of kindness. I hadn’t taken the time to get valid currency so I didn’t bother trying to acquire sustenance.

One Response to Experiencing DK2 at Shayla Games